Ever wondered what Roman Abramovich gets up to when he isn’t looking grumpy at Chelsea games? He’s standing a few yards away from me against a wall at Strelka in centralMoscow, a riverside culture and education hub a bit like a smaller Southbank Centre or a cooler ICA. And he’s not the only person of obscene wealth in the vicinity – there’s Alexander Mamut, the current owner of the Waterstone’s book chain.

Just over my left shoulder is Tim Barrow, theUnited KingdomAmbassador toRussia. Everywhere else in this steeply tiered courtyard venue, drinking free Beluga vodka cocktails and wrapped in orange blankets against the chill, are a range of outlandishly dressed urban hipsters that make our Dalston lot look like actuaries.

Unexpectedly, this colourful mix of the great and the funny-looking are here to see Matthew Herbert, a cult musician from Whitstable, performing a show about torture, war and censorship that will soon be seen in Trafalgar Square. It’s one of the more daring projects in the BT River of Music, two days of concerts in key London locations featuring musicians representing every Olympic nation.

For a corporate-sponsored event that is one of the biggest projects in the Cultural Olympiad, it’s an artistically heavyweight creation. The Scissor Sisters are the only big-name mainstream pop act involved, and elsewhere there are collaborations between Welsh-speaking folk band 9Bach and indigenous musicians from Australia, plus dance music veterans Transglobal Underground performing with artists representing seven countries from the Gulf region.

Herbert, 39, who speaks no Russian and has visited this country just a handful of times, has been picked to create a live music experience that tells us something about the biggest country in the world. He suspects he’s popular here given his concert attendance figures, but can’t know for sure as thanks to music piracy, his biggest album Bodily Functions has officially sold one copy in Russia.

The concert is a high-pressure collaborative project organised by the British Council, the cultural relations organisation, that sees him putting together an all-Russian big band from scratch to perform his jazzier material, plus two new songs about Russia today.

It’s also politically sensitive. At the time of our visit, protests are ongoing about the return of Vladimir Putin to the Russian presidency. The British Council has had a tricky relationship with Russia in recent years. It was closed down in the regions there by Russia’s foreign ministry in 2008, as part of the fallout from the London murder of former KGB spy Alexander Litvinenko. Culture is a great bridge-builder, the British Council’s newRussiadirector Paul de Quincey tells me: “Since then a lot of the work we’ve been doing has been trying to rebuild some of the trust that we lost. One of the best ways of doing that is through the arts.”

So it could have been risky to hand the controls to Herbert, a politically engaged producer and sound artist whose work with original samples created controversy last year on his One Pig album. A tough listen created from the sounds of a single pig from birth to slaughter and beyond, it was condemned by the animal rights organisation Peta before they had even heard it, despite its dripping blood and sawing bone noises being among the most visceral and compelling arguments for vegetarianism that I have ever heard.

He has a torrid time ordering lunch in the bar of our Moscow hotel, trying for herring, refusing salmon when it is offered instead and finally settling on a turkey sandwich without the bacon. He says he hasn’t knowingly eaten pork since he made the album, “but it’s hard because they hide it in all sorts of stuff.”

“I feel like a hypocrite every day,” he tells me. “I’ve been trying to cut down on flying and now I’ve flown here. But being asked to do a free show in Moscow and Trafalgar Square, it does feel like a good opportunity to try and do something a bit more thoughtful. Ultimately in the middle of the Olympics there’s going to be a concert in which we rip up copies of the Daily Mail, sing about torture and play samples of old people singing Russian folk songs. It does feel subversive.”

The song about torture, Battery, is from his 2008 album There’s Me and There’s You and tells the story of Bisher al-Rawi. He was an Iraqi informant for MI5 who ended up spending four years in Guantanamo Bay before being released without charge. The album vocals were recorded in McDonald’s on High Street Kensington, in the seat where Al-Rawi sat when he regularly met men from MI5. English jazz singer Alice Grant peforms it on stage with a black sack over her head.

During the newspaper song, Simple Mind from 2003’s Goodbye Swingtime album, Herbert usually samples the sound of the entire band ripping up copies of a right-wing newspaper that supported the Iraq war, because the song is about the media cheerleading for that invasion (hence the use of the Mail in the UK). Here in Moscow, toning down the seriousness and almost creating a party mood as the trumpeters hurl scraps of paper at each other, they settle for OK! magazine.

Herbert says that he didn’t want to take on current Russian politics in song. “It doesn’t feel appropriate as an outsider to criticise their government, though I’d be more than happy to criticise my own.” Instead, while researching for his new compositions he gravitated towards Russian fiction, re-reading Tolstoy and Bulgakov, and started to think more widely. “To be honest, I was overwhelmed for a while. Then my impulse was to open it up and say that it shouldn’t be me who decides what these Russian sounds are, it should be Russians. One of the great things about working with sound, for me, is that it’s a democratic form – not everybody plays a musical instrument but everybody makes a sound. So you can collaborate with people that wouldn’t normally be involved in something like this.”

He ended up with two songs from opposite ends of the spectrum. The first is slower and sadder and features the voices of inhabitants of Russian old people’s homes, stating their ages and singing their favourite folk songs in creaky voices. It seems to have a powerful effect on the locals. “It nearly makes me cry,” the Big Band’s guest Russian singer, Polina Kasyanova, tells me. “I know how old people live here inRussia, the circumstances, the conditions.”

For the second song, Herbert set up an answerphone service for Russian people to call in with the sounds of their babies. He ended up with nearly 400 samples and builds this joyous piece around one almighty squeal from a particular child. “Russia comes with such a weight of history and has been through so many upheavals. I liked the idea that these babies are Russian but they don’t know any of that yet,” he says.

Herbert gets excited when talking about the possibilities of sound as documentary. Among his other albums are One Club, recording the experience in a Frankfurt nightclub one night in 2009, and One One, comprised entirely of sounds made by Herbert himself.

“Because it’s a new format, I’ve got real freedoms at the moment. I went to a farm for broiler chickens and there’s no way I would have got in there with a camera, but I was allowed in with a microphone. McDonald’s hasn’t copyrighted the sound of their burgers, for example – yet. There’s a window here and I have a responsibility to go as far as I can while that window is open.”

He is dismissive of other Olympic projects that encroach slightly on his territory. “Someone asked me what sounds I would choose to representBritainand it’s a very hard question. The Olympic committee have answered it though – apparently it’s Duran Duran and the Stereophonics in Hyde Park!” Mark Ronson and Katy B’s Olympics song for Coca-Cola, which incorporates the sounds of Olympic hurdlers, table tennis players and archers,  is apparently “a glorious pot-pourri of shit”.

“All these sounds just disappear into this melee of trancey synths. I am an evangelist for the power of sound but then I get really defensive when people use it for bland purposes.”

At the Moscow show, the smiling young band of largely classically trained wind musicians seem thrilled to be involved in something so unorthodox. Herbert samples the crowd singing a note there and then and turns it into a glorious cacophony. InTrafalgar Square, the noise of a British audience will be in there too – a cultural mix that brings two nations together in a thrillingly modern way. 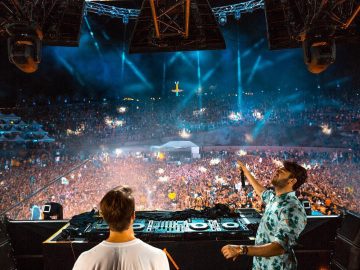