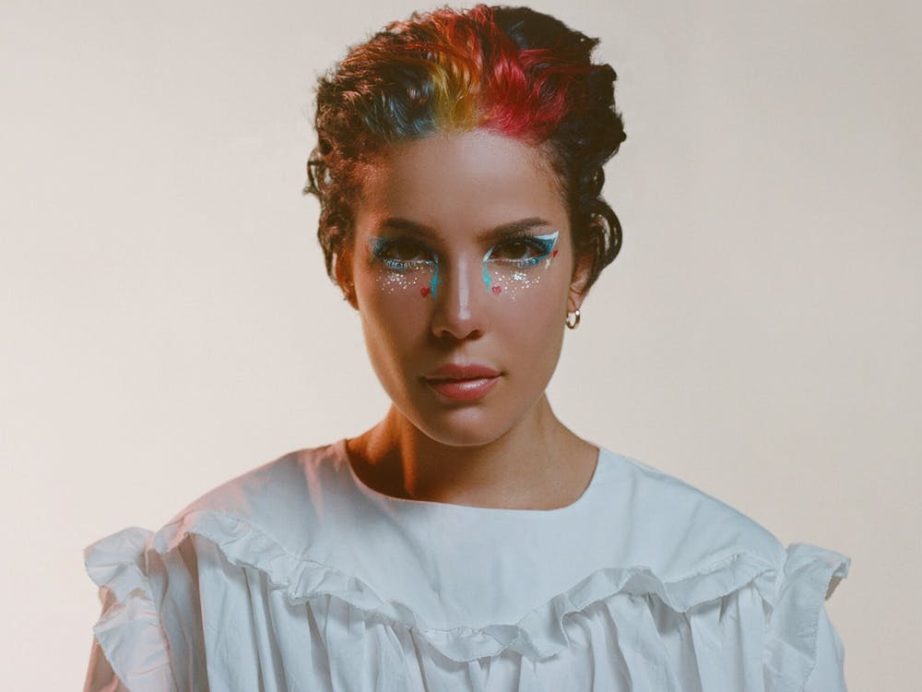 My first glimpse of Halsey seems suitable for a new superstar. She’s just a hand, a cigarette and a plume of smoke, hanging languidly out of a blacked-out car window on a New York street corner. Entering a casual restaurant in the Meatpacking District, she’s made an attempt at anonymity that screams “I am famous!” – billowing beige overcoat, black baseball cap and a shoulder bag that might be understated if it wasn’t clearly Prada. There’s much debate from her people over where exactly she should sit.

As of two months ago, the 21-year-old pop singer no longer has blue hair, which has slightly lowered the fequency of recognition on the street by fans. On the internet, however, it’s a different story: 1.2 million Twitter followers, 1.9 million looking at her on Instagram, a mass of admirers of her striking style who were already present in significant numbers by the time she put her first song online. Now she’s exploding in the real world, selling out Madison Square Garden on a US arena tour and playing Brixton Academy here next week, with UK arenas surely around the corner. She’s gone from self-releasing one single on iTunes to duetting on Justin Bieber’s new album and having her own MAC lipstick brand (it’s a dark grey-blue) within two years. It’s all happened so fast she talks of whiplash.

“I’m terrified to put out a second album because everything’s happened for me so perfectly that it’s got to be a fluke,” she tells me. She has that odd characteristic common in many showpeople, doubting her achievements while making sure that you know all about them. “I have this first album that sells over a hundred thousand copies in its first week, debuts at number two, goes gold, the single goes platinum, we’re doing Madison Square Garden. I’m just waiting for everyone to be like, ‘We liked you last year but we don’t like you this year. That was all an accident.’”

Born Ashley Frangipane in New Jersey (her stage name, pronounced “Hall-see”, is an anagram of her first name) and now based in LA, she already had expeience of going viral on the internet in 2012, with a widely shared song that she wrote about Taylor Swift dating Harry Styles. She put it online as a joke and insists that she was never a “YouTuber” – those who upload cover versions in the hope of being discovered. “My followers went up a little bit, I had like a week of being on Huffington Post and so on. It was like having a popular tweet, it wasn’t like all of a sudden I was an international pop star.”

However, when fame did come, it came fast. Her first original song, Ghost, was self-released on iTunes and had the major labels calling almost immediately. “In one week  I went from being a girl who owed a guy thousands of dollars – my manager Anthony was paying for my outfits, paying for my food, I was sleeping in his parents’ basement – to taking meetings with every major label in America. The next morning I had a record deal and wrote him a cheque to pay back all that money.”

Her debut album, Badlands, came out at the end of last summer. It contains melodic electronic pop with a darker edge that places her beside Lorde and Lana Del Rey, and the leftfield production work of little known Norwegian Lido and Sufjan Stevens collaborator Son Lux, rather than the usual bankable Swedes. She sings about her demons, sex and being sad. New Americana, her attempt at a generational album, is a big tune that boldly sets out her stall: “We are the new Americana/High on legal marijuana/Raised on Biggie and Nirvana”.

Part of her appeal is her honesty. In conversation it feels as if nothing is off limits. She has talked before about being diagnosed as bipolar and today she quickly brings it up. “People around me like me the best when I’m depressed, because I’m a bit more passive. I’d say I’m pretty depressed this week,” she tells me. We’re only talking about her tightly cropped black hair, which here, with minimal make-up, makes her look like a pretty teenage boy. “I shaved my head a couple of months ago, on camera at a photoshoot. It was definitely a very manic decision.”

She’s astonished, shocked, at her own success. It seems like it doesn’t quite seem real to her, and that can mess with her head. Her last show in New York was in front of 1,200 people. Her next one is in front of 12,000. She gets compared to Katy Perry too, but Perry took many years to arrive at superstardom. “She worked her ass off. The first few years she really struggled and didn’t think she was gonna make it. I kind of woke up one day and everyone was like, ‘Congratulations! You made it!’”

She says that she doesn’t want me to make her look like “the woe-is-me pop star” but I have caught her on a negative day. She sounds like she could do with a break. “I’m a musician with a very unique mental state, I suppose. I’m agoraphobic. I’m scared to leave my house. I haven’t been alone in like two years. I’m either with my boyfriend or my assistant, my manager or my tour manager. I won’t go anywhere by myself, I’m too terrified. Of course you develop anxiety, and a warped sense of self. You read interviews and think, ‘Oh shit, is this how people see me?’ You constantly self-reflect.”

She can’t get someone else to handle her social media presence, because that constant line of direct communication is vital to her appeal. But it doesn’t sound healthy. “You have no idea,” she says. Three weeks ago she revealed on Twitter that she has endometriosis, a disease of the uterus lining that causes pelvic pain and can cause infertility. She gets out her phone to show me a stream of foul “Halsey’s infertile! Great!” tweets from anonymous strangers. “I didn’t get the manual for that when I became a musician. I didn’t get the manual that said, ‘When you wake up every day, thousands of people are going to tell you they hope you fuckin’ die and you should kill yourself.’ When you have a mental illness, that’s a dangerous game to play. My friends from home tell me, ‘Your life is so cool!’ but this is the thing that you will never understand.”

Yet even with all this going on, she insists that she needs to stay online. “Having people attack you in a personal way is the price you pay for being able to connect with people in a personal way. If I’m opening my arms for you to come running into them, you can also shoot me in the chest.”

As we’re urged to wrap up for her to head on to rehearsals for The Tonight Show Starring Jimmy Fallon, Halsey’s lunch barely touched, we decide to try and leave things on a positive note. She turns her thoughts to performing. “I’m clumsy, I’m uncomfortable, I say things that I shouldn’t, but when I get on stage that’s when I’m filled with this newfound grace. Being on stage is the only thing that keeps me liking myself a little bit. That’s when I find my self-worth, so I feel like I have to keep doing this or we’re gonna have a serious problem.”