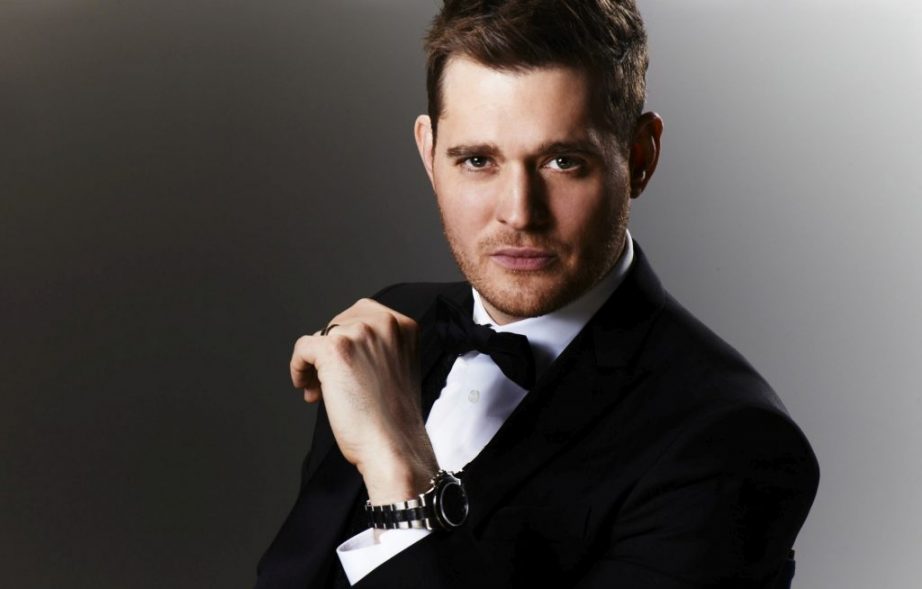 In a sharp blue suit, impeccably shined shoes, necktie done up to the top button for once, handsome as a shop dummy, Michael Buble looks every inch the new host of the Brit Awards. It was announced today that the Canadian singer, a three-time International Male nominee whose mantelpiece is Brit-free, will be replacing Ant and Dec as the presenter of the UK music business’s biggest bash in February.

“It’s a huge honour for me to host such a big night in music.  Even though I didn’t grow up here I always watched the Brits and was aware of their impact globally. Above all, as a music fan this is the perfect gig to get,” he said today.

We meet a few days earlier in a suite in the Soho Hotel, at a point when the 41-year-old can say that he has big plans but can’t say exactly what they are. “There are certain things that I’ve been offered this year that I would have automatically just said ‘No’ to, and instead, I find the strength to say, ‘Okay’. Things that I would have said, ‘Now why would I put myself in that position?’” he tells me.

He mostly credits parenthood with giving him a new perspective on a career that has been staggeringly successful by anyone’s standards: his smooth mix of Rat Pack-style jazz covers and pop originals has resulted over 30 million albums sold, including 10-time platinum status in this country for his 2009 release, Crazy Love, and a Christmas album that is now as essential to the season as the Queen’s speech. The BBC is currently filming a one-off special with him, a successor to last year’s Adele programme. Forbes magazine listed him as the 18th highest-paid musician of last year, just behind Paul McCartney.

He’s now father to Noah, three, and seven-month-old Elias, with his wife of five years, Argentinian actress and model Luisana Lopilato. They try to divide their time 50/50 between his hometown of Vancouver and hers, Buenos Aires. She calls from Argentina during our conversation, where she’s making “the most important film of her life”, according to Buble. He calls her “Mi amore”. His phone has a large glittery snowman sticker on the back, put there by his eldest son.

“I’ll give you an example,” he says to me. “I recently sang at Tony Bennett’s 90th birthday party. I came on stage to do the rehearsal and when I looked into the audience, I saw cardboard cut-outs of Bruce Willis, Kevin Spacey, Lady Gaga, Elton John, all these gigantic stars. The old me, truly, there would have been a little wee coming out. ‘Oh my God, I’ve gotta sing in front of these people!’ But it was just different, it’s funny. I just thought to myself: ‘I’m Noah’s dad, I’m Eli’s dad, and this is all just wonderful icing on the cake.’”

He’s earnest in conversation, much more serious than on stage, where he’ll swear and tease his adoring audience. I’ve just caught his comeback show at the Roundhouse, his first live appearance for nine months, where I was entertained within an inch of my life. Here he sits forward and makes almost uncomfortable amounts of steady eye contact. When he arrives he shakes my hand firmly and repeats my name, stamping it on his mind so he can use it while we talk. When he doesn’t, he calls me “Sir”. At one point he wants to show me “my most viral moment” on his phone, a clip of him inviting a 15-year-old fan on stage to sing, who turns out to be remarkably good. I admit that I haven’t seen it before and he says, “That’s okay. That’s okay that you haven’t seen it,” but it doesn’t sound quite as though it is.

What he wants to get across is how serious he is about his new album. Nobody But Me, coming later this month, is his seventh major label release and the first time he’s taken charge of the production. For someone who is expected to come up with one of the year’s biggest sellers every time he steps into a recording studio, this was a significant risk.

“There was a year and a half of me not sleeping. I spent months with people telling me I was nuts for producing it myself,” he says. “Previously, with a jazz standard, I would have gone in with a producer who would have put down the big band to a click track, then have me sing the song 13 or 14 times. Then he would have taken that and cut the vocals together. Listen, it was slick, it was beautiful, people really liked it. But I felt I could go into the room and do less – and by doing less, it could be more.”

He starts telling me about the new album’s title track, which was made with the help of Swedes Max Martin and Johan Carlsson, precision pop songwriters known for a very different type of music from Buble’s. “Even up to the night it got mixed, I had people calling me saying: ‘You must get that version off the record. People will never accept it.’ It became this thing. I had someone tell me unequivocally that if I did it, I could say goodbye to half my audience in America.”

He may talk as if he’s just made an industrial punk track with Nine Inch Nails, but what he means is that the middle part of the song has a rapper on it: Tariq “Black Thought” Trotter of jazz-friendly hip hop band The Roots. Otherwise, it’s a swinging, finger-clicking number reminiscent of Louis Prima’s most fun stuff. It doesn’t sound like a career ender to me.

“My issue was that they had categorised me so deeply in their own minds that they couldn’t even imagine a world in which Michael Buble had a freestyle artist on his song. People have certain ideas of what they think you should be, and I have fought that categorisation my whole life.” I mention that I deliberately didn’t use the word “crooner” in my review of his concert, only to find it printed in the headline anyway. “You can’t stop your editor! It’s a categorisation that’s hard, but if you actually look it up, it’s a lovely word.” He does just that, and searches for a definition for “to croon” on his phone: “’To hum or sing in a soft, low voice, especially in a sentimental manner.’ Well, there are worse things in life.”

Alongside the acoustic pop of the single, I Believe in You, and the bubbly Someday, a duet with Meghan Trainor co-written by her and Harry Styles, there’s still plenty of familiar fare for those who don’t want him to change too much. Covers of My Baby Just Cares for Me and God Only Knows are hardly the choices of a crazed risk-taker, but listen closely and you can hear a difference in the way he approached them.

“With God Only Knows I’d been listening to it coming into the studio. I asked my pianist Alan Chang if he knew it. We set up the piano, put the microphone right next to it, turned off all the lights and I stood beside him with a picture of my wife and kids on my phone. I sang it one time, listened to it back and said, ‘That’s what I want’. I want it to be real. Listen, I know my voice cracks, I know I’m pitchy, but I’m telling the truth here.”

Nobody But Me is released on October 21 on Warner Bros.