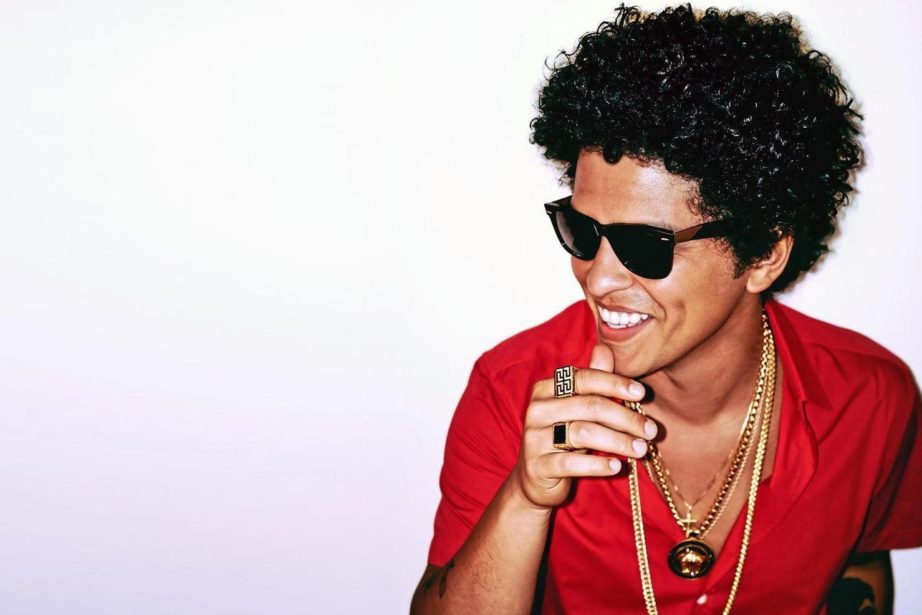 When you’re out and about today, keep your eyes peeled for a small superstar in a big hat. Bruno Mars is in town, bringing a welcome dose of horn-swinging old-school entertainment to the O2 Arena. He’s here all week – try the veal.

Mars is in the middle of four shows here, the first of which earned five stars in this paper a couple of days ago. The only other city where he’s doing this many performances in one place on this 86-date world tour is his current home, LA, this coming November. The UK is keen on the 31-year-old from Hawaii, to put it mildly. We sent his early singles to number one three times in 2010 alone, gave him three Brit Awards and in 2014 put Uptown Funk, his inescapable, irresistable Mark Ronson collaboration, in the number one spot for seven weeks straight. We’ve so far kept his latest album, 24K Magic, his third, in our top 20 for 21 weeks.

So he’s pleased to be here, settling in for an extended stay in a hotel that has been his London favourite for years. He forbids me from telling you where it is, but naturally it’s intimidatingly swanky, the kind of place where only someone as A-listy as him could get away with strolling around in a rustly Nike tracksuit and San Francisco 49ers cap. He’s feeling relaxed: “It’s nice when you know you’re gonna have some good sleep and a proper shower,” he says. When we meet in a suite just after 1pm, he says he’s been up for an hour.

He’s already done a bit of shopping during his stay, buying basketball shoes and some sunglasses to add to a mighty collection. “Whereabouts was I? I don’t even know, I just jumped out the car. It was happening, though. It looked like Vegas or something, there was people everywhere. Do I get bothered? ‘Bothered’ is a bit strong. A few people came up to me.” He’s also been hanging out at Abbey Road Studios with his current support act, Anderson .Paak, and Nile Rodgers from Chic. On Monday he got to play the piano in Studio Two, the room The Beatles used, but he didn’t partake of the zebra crossing. “The tourist in me wanted to, though.”

It’s surprising to find him happy just to settle in, hang out and play the basketball video game NBA Jam with his eight bandmates, because this is a guy who works hard. The new album comprises only nine songs and 33 minutes because his music takes such a long time to be polished to a smooth funk lustre. “For me there are so many different ways to write a song, and that’s a puzzle and a problem. Do I know the right way to do it yet? No. I don’t have 18 good ideas. If I had 18 good ideas you’d get two albums.” His backing band, The Hooligans, which includes his older brother Eric Hernandez on drums and his co-writer Phil Lawrence on backing vocals, are tightly drilled in the manner of the crack musicians that used to surround Prince and James Brown.

“We’re all hungry. They wanna be the best. You ain’t gonna see this shit anywhere else,” he says. “The guys are a unit and they care so much about everything. We’re soldiers out there.”

When Mars and the band were invited to perform the most high-profile 13 minutes in American music – the Super Bowl Halftime Show – in 2014, they didn’t need the trapeze antics of Lady Gaga or Katy Perry’s gigantic space tiger. The stadium cameras stayed tight on the band the entire time, knowing they were all the spectacle required. He was welcomed back to the same spot just two years later, for a dance-off to Uptown Funk with Beyonce and Coldplay. Only Gloria Estefan, Justin Timberlake and for some reason, Nelly, have appeared at the Super Bowl more than once.

“The concept is that as long as we have our instruments and our mics, my band is able to kill anywhere,” he says. “We’ll play a party sometimes, and we do a residency in Vegas that’s more of a free-for-all, and the band will sweat no different than we’re gonna be sweating at the O2. We can perform in a cafeteria with no production, so when we do get the smoke machines and the lights, that’s just a bonus.”

In person Mars is five-foot-five of cockiness, as you might expect someone who’s sold over 26 million albums and 170 million singles to be. But he’s funny too. He won’t give much away about his private life. He lives in a pad in the Hollywood Hills with his girlfriend of six years, model Jessica Caban, and their Rottweiler Geronimo. When I ask what the place is like, he simply replies: “Marvellous. You know Narnia?”

So I wonder how much of the character he appears to be in song and on stage is a persona: shades and silks, pinky ring gleaming, and lyrics in which women generally appear in interchangeable multitudes. “So many pretty girls around me and they waking up the rocket,” he sings on the new album’s title track. “I got too many girls on hold for you to be so bold,” he brags on Calling All My Lovelies. How does that tally with his settled home life? Do we ever hear the man born Peter Hernandez in his music?

“I think you hear me a lot. I’m a shit-talking guy living his dreams, and that’s what I wanted to give,” he says. “This is what I wanna hear. This is what I wanna say. And to be honest, it’s what my woman wants to hear! She’ll tell me if it’s wack.” So she’s never asked you to write a song for her? “Not yet. In that regard she’s great, she’s amazing.”

In any case, there probably isn’t much that the man on the street can relate to in the life story of someone who was famous on Hawaii at the age of four as “the world’s youngest Elvis impersonator”, performing with his family’s band The Love Notes alongside his Puerto Rican-Jewish father Peter Sr and his Filipino mother Bernadette. You can see tiny Bruno grinding his hips and curling his lip in the 1992 Nicolas Cage and Sarah Jessica Parker film Honeymoon in Vegas. It’s no wonder his music has ended up as fantasy escapism. You can enjoy a Bruno Mars sex song called Versace on the Floor in the same way you enjoy an X-Men movie: it’s spectacular fun but it’s never going to happen to you in real life. Equally, he’s got no interest in writing about politics: “I can’t write a better song than my heroes have written already, like Marvin Gaye and What’s Going On. But maybe I can write a song that can bring everybody together on the dancefloor to escape the reality of what’s going on,” he says.

His parents divorced when he was 11 and their band ended. Thus began an extended period of trying to get back in front of big audiences. He moved to LA in his late teens and couldn’t get signed. He has told a story before about a homeless man defecating in his parking space where he lived: “It was just foul, and no one cleaned it up. So every morning, I got reminded of where I’m at.” Today he emphasises his incredulity at the kind of acts he was employed to write songs for – who included the Sugababes and Alexandra Burke – while being told that he wasn’t going to be a star in his own right.

“I just really didn’t understand how I could be getting rejected this much. I heard it all. Me looking the way I looked. Plain and simple: ‘He’s not a star.’ You guys are making me work with people I wouldn’t spend a nickel on. And I have to do this and I’m grateful for it, but I didn’t understand the business.”

He finally broke through as a guest voice on two singles that he wrote with his production team, The Smeezingtons: Nothin’ On You by B.o.B and Billionaire by Travie McCoy. Since then his music has been all over the place in style, from the novelty whistling of Lazy Song to the energetic rock of Locked Out of Heaven, which sounds like The Police. The stellar success of Uptown Funk, however, seems to have made him confident that backwards-looking funk and soul can still succeed regardless of what else is in the pop charts right now. The new album is his most coherent and enjoyable yet, and as is traditional among sycophantic interviewers, I tell him I love it.

“Oh yeah? Thank you. What’s your track?” he asks. I say that the one that sounds most like James Brown, Perm, does it for me a bit more than the smoochy ballads. “Well I wasn’t thinking about you when I wrote the smoochy ballads,” he shoots back.

It’s almost time to set off to the O2 for his soundcheck. I ask what the band routine is, just before they go on stage for another 90 minutes of horns and soul and formation footwork. It mostly involves gambling on video games, but also a prayer. What does he ask for? “Keep the audience safe, keep us safe, and give us the strength to give these people a night they’ll never forget.” Two nights down in London, it’s working.