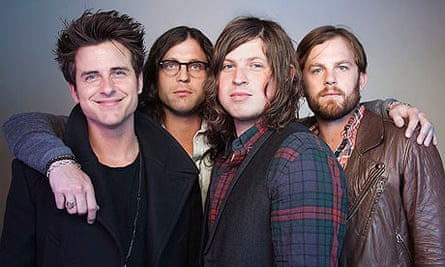 The Followills come in two by two. That’s the way the three brothers and one cousin who make up Kings of Leon prefer to do interviews. First I get slow-talking middle sibling Caleb and his quieter cousin Matthew, the singer and the lead guitarist forming the more serious, less at ease faction of the Tennessee rock band. Then it’s bear-like big brother Nathan, tattooed and imposing behind sunglasses, and peroxide-haired Jared, the youngest at 30. The drummer and bassist swoop in second, to lighten the mood with friendlier chit-chat and jokes about golf.

This is me catching them at a good time. They’re at a sunny outdoor picnic table behind a huge temporary stage that has been built in the car park of the Opel car factory on the outskirts of Frankfurt. Soon they’ll perform to yet another crowd of thousands who, on this occasion, are part of a wider German street festival that for reasons unexplained involves everybody wearing bright yellow trilby hats. Next month they’ll be in London to top the bill at one of the vast British Summer Time Hyde Park shows. With a seventh album, WALLS, that sounds vital and passionate and contains some of their best tunes, they seem to be over the hump that almost toppled them in 2011. “We’re at the flowers and chocolates stage right now,” says Nathan.

It’s Caleb in particular who seems to have been given a list of rock star activities that he can tick off as a to-do list – from the wild living of Kings of Leon’s early years, when they first barrelled out of Nashville in 2003 with forests of facial hair and a ramshackle rock and roll sound, to the more glamorous pursuits that have been available to him since their fourth album, Only by the Night, and its multi-platinum singles Sex on Fire and Use Somebody, made the band arena rock mainstays. Since 2011 the 35-year-old has been married to the Victoria’s Secret and Sports Illustrated model Lily Aldridge. In July of that year he walked off at a show in Dallas, saying: “I’m gonna go backstage for a second. I’m gonna vomit, I’m gonna drink a beer and I’m gonna come back out here and I’m gonna play three more songs.” He didn’t come back and the band cancelled that tour’s 26 remaining concerts – a catastrophically expensive beer that naturally sparked talk among outsiders of a permanent split.

Today they play it down, saying that if the drama had happened behind closed doors rather than on stage at an arena, it wouldn’t have seemed like such a big deal. “Everything was bigger in the eyes of the press,” insists Caleb. “Because we went quiet for so long, a lot of people were trying to figure out the story. But we were all having beers together, meeting up for dinner and stuff. We’re family. You tend to get over it pretty quickly when it’s family.”

“I think at the point in our career when everyone thought a breakup was inevitable, it was never that close in our minds,” adds Nathan, 37. “We never got to the point of thinking, ‘Oh my God, we’re done.’ We definitely knew we had to take a break. We’d been pushing ourselves so hard. It’s okay to pump the brakes. Obviously you don’t want to do it in a public setting, but if that hadn’t happened, I don’t think we would have made many more records.”

They made a fairly lacklustre album, Mechanical Bull, in 2013. It was still a platinum-selling number one in this country, which has been buying Kings of Leon albums in huge numbers since well before their homeland noticed them. But it’s on the new one, last October’s WALLS (which stands for We Are Like Love Songs) that they sound hungry to remain one of the biggest rock bands in the world. They’ve got soaring, widescreen anthems such as the single, Waste a Moment, and lighter, poppier sounds in the shape of Around the World and Eyes on You. Even the heavier lyrical material, such as Muchaho – a tribute to the band’s long-term art director Brett Kilroe, who died of cancer in 2016 – features whistling and a Latin feel. WALLS became their first US number one.

“I feel like making music is just a lot of fun. And it’s a crazy, changing experience,” says Caleb. “Things that I used to find inspiration in, I probably can’t relate to as much. I was writing songs about the rock and roll lifestyle, never sleeping, pretty girls and all that shit. Now that’s not where my head is. There are still so many things musically that we feel like we haven’t accomplished yet.”

It’s easy to see how they could become complacent. All four are now married, with two sons of six and four for Matthew and a four-year-old daughter each for Nathan and Caleb. Beautiful Rolexes abound. For this European tour, they’re “hubbing” rather than sleeping on a bus or in hotels, which sounds fantastic – step off stage in Germany onto a private jet back to Nice where the families are staying in rented homes, get into bed by 1.45am. “Our wives have as much of a say in where we stay as we do, because they’re there the entire time. They have to like it, their boyfriends have to like it…” jokes Jared.

Back in Nashville, where they all live, Nathan golfs at the same club as Alice Cooper and Steven Tyler when they’re in town, Matthew collects guitars and fine wine and they’re all involved with various local restaurant investments. Nathan recommends an Italian called Adele’s and a taco place called Bajo Sexto, which are doing so well that they cover the losses of the others. The band also organise a September food festival, Music City Food + Wine. Do they have any tips for the Evening Standard on how to run its London Food Month? “Know that you’re gonna lose money the first year, lose less money the second year, and hopefully break even in year three,” says Jared. “And make your friends pay for their own tickets.”

So why not take more time between albums, enjoy your kids while they’re young and make the fans truly desperate to see you when you finally do show up? Kings of Leon released five albums between 2003 and 2010, so they’ve slowed down a little, but not much. “The thing is, we don’t write and record an album so we can go on tour for two years. We do it because making an album is super fun. That creative aspect is so rewarding. We like having new music,” says Jared.

That hunger to do great work is back again, even if they feel more isolated as a guitar group in 2017 than they did in 2003. When asked which new bands are snapping at their heels, wanting to nab their festival headliner slots, Nathan suggests Royal Blood but doesn’t sound convinced.

“For the most part, when we go into the studio every morning we’re looking at each other like it’s a brand new day, a clean slate. We could do something right now that changes people’s minds,” says Caleb. “At this point we’re not really looking over our shoulders any more. As long as we don’t fuck it up, we have some longevity in us.” It looks like their best opportunity for messing things up has been and gone. These Kings won’t be giving up their crowns now.