Thankfully the UK has yet to experience a music festival disaster to rival Fyre’s damp squib in the Bahamas, but our outdoor calendar is still very much in flux. One of the stalwarts, Bestival, is rumoured not to be happening this summer, though its little sister Camp Bestival is still on. V Festival doesn’t seem to have survived its sponsor-free revival as RiZE, and one of the most unusual, Festival No. 6 in Portmerion’s Italianate village, has also shut up shop. However, with Glastonbury back after its gap year, there’s still a memorable summer in store. Here’s our selection of the best tent events outside London.

With that voice like an ancient bluesman whose woman done him wrong, George Ezra will fit right in at a festival that trades on its history as the home of past performances by The Doors, The Who and Jimi Hendrix. The rest of this year’s line-up also veers towards retro rock, with sets from Noel Gallagher, The Coral and Courteeners, while Lily Allen, Anne-Marie and Jess Glynne should brighten the place up a bit.

We don’t yet know much about who will be at the awakened giant of music festivals, but we do know what won’t: plastic drink bottles. The organisers are aiming to stop over a million single-use bottles from being thrown away on site. Instead you can sip from your reusable one to the sounds of Stormzy, Kylie and Janelle Monae, and if the rumours are true, Janet Jackson, The Cure and Liam Gallagher too.

This venerable event is back doing the joint headliner thing this summer, with highly popular Americans Post Malone and Twenty One Pilots sharing top billing on the Saturday in Reading. Elsewhere there’s a fairly even split between hard rock (Foo Fighters, You Me at Six, Royal Blood), indie pop (The 1975, The Wombats, Blossoms) and rappers (AJ Tracey, Octavian, Stefflon Don).

Previously only known as the place where the tube terminates, Upminster is also where festival season begins with this May gathering of an army of DJs. There’s a huge array of stages given names including Glitterbox, Solid Grooves and We Are Disco. Appearing at the decks will be everyone from Chase & Status and Armand Van Helden to Basement Jaxx and Craig David.

This event just north of London is a rare one that will let you bring your dog, who is likely to enjoy the sounds of his ancestors Wolf Alice, chewing on Rag ‘n’ Bone Man and chasing after Echo & the Bunnymen. There’s also plenty of fun to be had for the two-legged, especially in the vicinity of Nile Rodgers & Chic, The Go! Team and The Cuban Brothers.

Now over two decades old, Truck has earned a reputation as a fine place to see big indie names in relatively intimate surroundings. This summer the 10,000 attendees can see Two Door Cinema Club, Foals and Mercury winners Wolf Alice in the top slots, while Idles, Shame and Sea Girls should impress further down the bill.

Calling this one a boutique festival doesn’t quite do justice to its poshness. There’s a lakeside spa, horse riding and food on offer from the likes of Angela Hartnett and The Palomar’s chef Yossi Elad. The Royal Academy of Arts and Sadler’s Wells are on site, as are the reformed Bombay Bicycle Club, Swedish dance sophisticate Robyn and piano man Tom Odell.

You’re nobody if you’re not dragging around a customised garden centre trolley full of ankle-biters at this colourful weekender, whose theme this year is “Heroes vs Superheroes”. You know it’s a child-centric music festival when Mr Tumble draws a bigger crowd than the headliners. Nowhere else this summer will attendees be forced to choose between Napalm Death and Shaun the Sheep’s Vegetable Orchestra.

You and your family can stay on this bucolic site for a whole week with a Settler’s Pass, exploring the Welsh countryside before the festival wraps up with its children’s parade. There’s a stream running through the site for muddy play, and Einstein’s Garden for older kids. Meanwhile the grown-ups can enjoy a vast range of real ale and music from Father John Misty, Eels and Sharon Van Etten.

A nominee for Best Family Festival at last year’s UK Festival Awards, this one has a campsite far from the noise, a 30,000 square metre Kids Arena and tickets at £8 a day for 5-12-year-olds. The music line-up is heavy on reunions, with the reformed Specials, Doves and Zutons all on the bill. New Order, Clean Bandit, Rudimental and current number one star Lewis Capaldi will also appear.

This party in Norwich is packed with people who’ve been in the top 40 recently, which will appeal to younger music fans. Anne-Marie tops the bill alongside Tinie Tempah, while Ella Eyre, Mabel, Jax Jones and Not3s also boast plenty of pop hits between them. There’s also a wide range of dance music on offer from Andy C, Hannah Wants and Disciples.

Usually the only philosophy at music festivals is discussed at 3am in a stone circle between people who have mislaid their trousers. This gathering for dancers and thinkers will feature political debate with Anna Soubry, Dawn Butler and Liz Truss, religious instruction from bishop Helen-Ann Hartley and science with Roger Penrose, plus music from Anna Calvi, Donovan and British Sea Power.

This event celebrating both science and music comes at exactly the right time this summer, taking place 50 years to the day since Neil Armstrong and Buzz Aldrin walked on the moon. The Jodrell Bank telescope, which tracked their craft, will loom over numerous speakers on the subject, as well as electronic acts including Kraftwerk, New Order and Hot Chip.

This festival comes with a view of the sea, which will be dotted with top surfers taking part in the World Surf League qualifying series. If you get bored of the beach you can enjoy a suitably lively music menu that includes rap legends Wu-Tang Clan, tsunami-voiced Florence + the Machine and the indie rock bombast of Foals.

Blur’s bassist’s farm becomes home to the “Alex James Cheese Hub” once again at this popular mix of eats and beats. Food-wise, this year there are appearances from Bake Off’s Prue Leith, Gennaro Contaldo and Raymond Blanc. Tasty in a different way are the music headliners Rudimental, Jess Glynne and Elbow.

This one takes in the full range of the arts, from dance with Sadler’s Wells and a theatre area to an extensive comedy and talks bill and a new field full of crazily designed caravans. Should you exhaust all that, have a swim in the lake and then check out the sounds of George Ezra, Snow Patrol and Lana Del Rey.

Rather than heading for the fields, at Boomtown they build a new city: 11 districts called things like Barrio Loco, Copper County and Paradise Heights. A brand new space, Area 404, is described as “a deserted industrial quadrant”. The music line-up features Ms. Lauryn Hill, The Streets, Chase & Status and Groove Armada.

Set near a lake in an abandoned village in the woods, Lost Village is full of theatrical quirks. There’s long-table banqueting, a hot tub area, a programme of talks and comedy, plus a dance-focused music selection headed by Maribou State, Bicep and Little Dragon.

End of the Road

Having outlived Wild Life, a sibling festival near Brighton, it’s now worth heading north for the best selection of hip hop, dance and R&B. A colourful line-up includes US stars Cardi B, Solange and Migos, homegrown rappers Stefflon Don, Loyle Carner, Little Simz and Slowthai, and sophisticated pop acts Mark Ronson and Christine and the Queens.

Those who think the O2 Arena setting of the C2C: Country to Country music festival isn’t, well, country enough, should head to the fields for this Americana-themed newcomer. The winner of Best New Festival at last year’s Independent Festival Awards is bringing an impressive selection of guitar strummers to its intimate main stage this summer, including Band of Horses, The Staves and Kris Kristofferson.

It calls itself a jazz festival but you don’t have to be deeply immersed in the scene to enjoy its major bookings, which range from the hip hop and R&B of Ms. Lauryn Hill to the soul of Gladys Knight and the smooth balladry of Jamie Cullum. An idyllic setting in the Sussex Downs makes for an appealing package.

Now boasting a suitably global presence with its festivals in Australia, Chile and Mexico, the original world music event continues to scour the planet for the most eclectic music line-up possible across six stages. This year that includes Malian singer Salif Keita, Bob’s lad Ziggy Marley, Liniker e os Caramelows from Brazil and our own dance veterans Orbital.

Folk is a relative term at this long-running event. The bookings this year stretch from raspy country singer-songwriter Lucinda Williams to guitar-plucking Swede Jose Gonzalez and electronic experimentalists Tunng. Mercury nominee Nick Mulvey is a guest curator who’ll be bringing his mates along.

Battling with London’s South West Four festival for the August bank holiday attention of the nation’s clubbers, this long-runner between Liverpool and Manchester has no shortage of big names bringing the beats. Calvin Harris, Tiesto, deadmau5, Faithless and Fatboy Slim will all be there among many others.

There’s pop metal fun to be had at this summer’s installment of the UK’s loudest festival, when Def Leppard take to the stage to play their 1987 mega-seller Hysteria in full. Elsewhere the bill is packed with older, familiar names including Slash, Smashing Pumpkins, Slipknot, Tool and what’s apparently the last ever UK appearance from thrash giants Slayer.

Synthesizers will be thin on the ground at this gathering for fans of classic rock. Its latest selection of oldies, plus younger bands that sound like oldies, includes The Darkness, Black Stone Cherry, Foreigner and Airbourne. It’s also worth a ramble to discover smaller stages dedicated to blues and “outlaw country”.

This smaller event in a beautiful Lake District setting is one of those that comes with a fancy dress theme – still to be revealed at press time. It also has a line-up heavy on the indie rock, with appearances high on the bill from Courteeners, Manic Street Preachers and returning Cheshire band Doves.

Even if you didn’t make it to see Oasis at Knebworth in 1996, you can get a feel for it at this new weekender that aims to rekindle the spirit of Britpop. Perhaps bring a copy of Loaded magazine to flick through between nostalgic sets from James, Embrace, Black Grape and the reunited Sleeper. 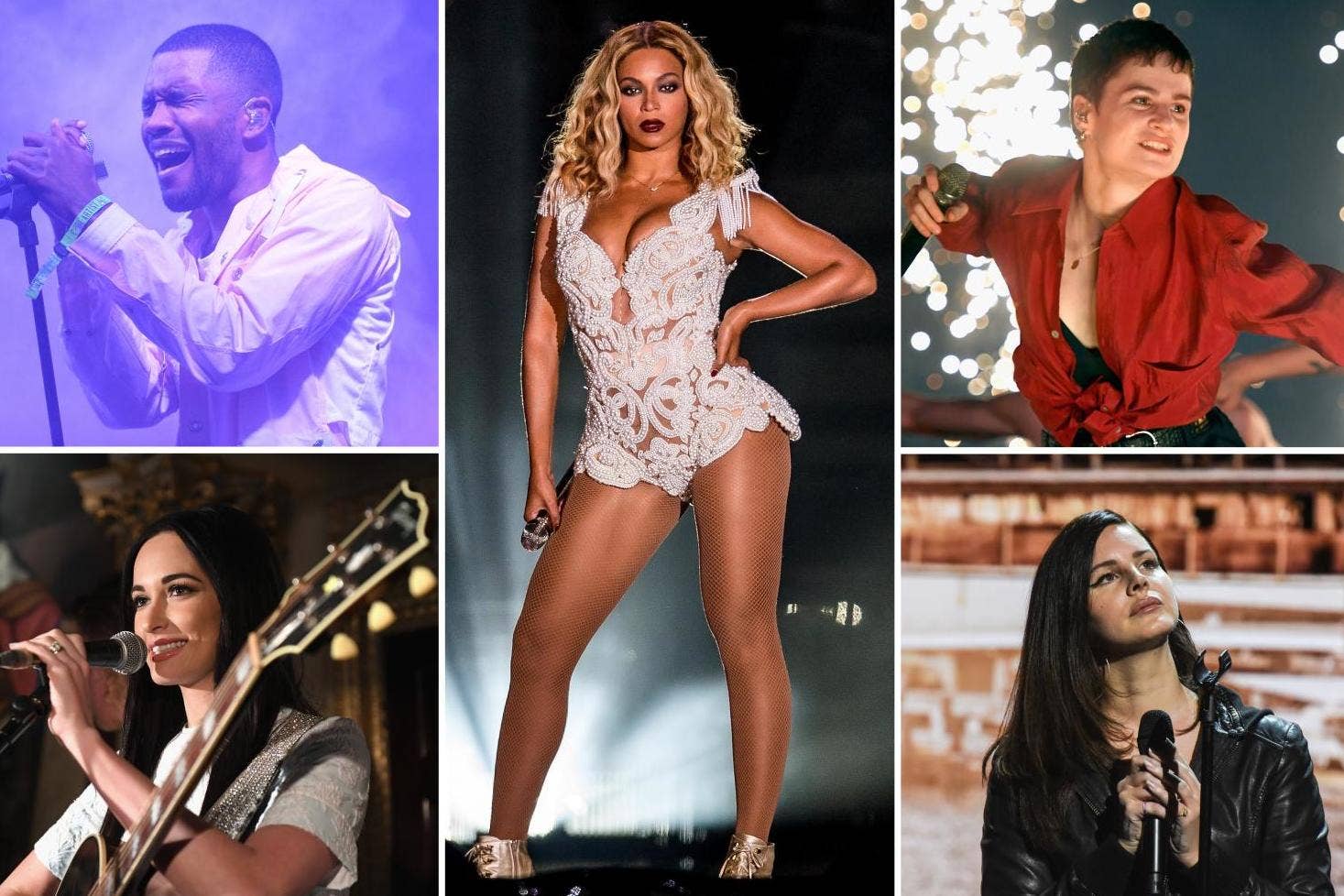