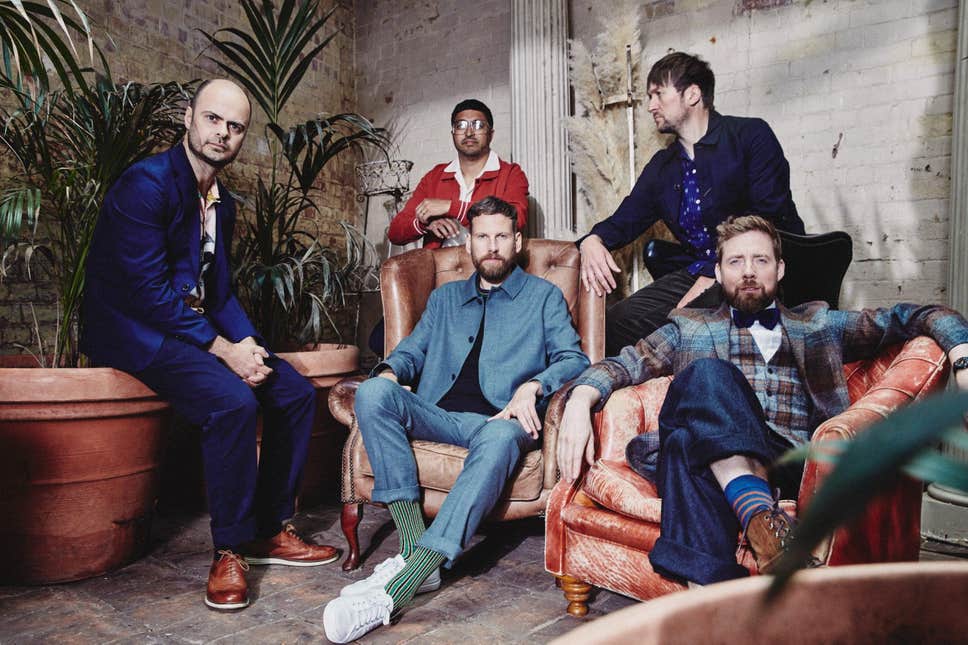 First things first: why is the new Kaiser Chiefs album called Duck? Is it a song title? A reference to a key lyric? Some sort of oblique nod towards environmental issues? Or just Ricky Wilson’s favourite part of a Chinese takeaway?

“It just is,” says the singer, 41 – apparently the band’s last word on the subject. It began as a flippant comment from guitarist Andrew White, who said: “Let’s call it Duck and put a dog on the front.” The album, coming next month, has ended up having a pastel-hued, summery photo of a small building on the cover, with no dogs or ducks in it – no further explanation required.

Being a well-followed chap on social media, Wilson’s first thought was: “Duck… What could people think that’s bad about that?” In the end he concluded that even the easily offended would give it a pass. “It’s just a word. It’s your entry into the album. I wanted it to be relatively easy, not laboured over.”

The Leeds quintet’s seventh album is easy to love when you stick it on, too – 11 songs bursting with energy and tunefulness, with Wilson’s sharp one-liners and a positivity that might surprise those who still know them best as the small-town Saturday night satirists of I Predict a Riot. If you were looking for a song to sum up Brexit Britain today, you could do worse than the Kaiser Chiefs single The Angry Mob from all the way back in 2007 (“We are the angry mob/We read the papers every day/We like who we like, we hate who we hate/But we’re also easily swayed”). Instead their comeback single, released next week, is called People Know How to Love One Another.

“The title isn’t a command. It’s just a statement,” says Wilson. “We’re not telling everyone to love one another. We’ve never really told people what to do.”

It’s a joyful three-and-a-half minutes, centred on an air-punching chant of a chorus. “There’s always a chant in a Kaiser Chiefs song,” he reminds me, and he loves this one. “I think there are a couple of moments on this record which are defining ones. People Know How to Love One Another, I really think could be – if the wind’s blowing in the right direction – one of our biggest hits.”

However, he doesn’t sound convinced that it could have wider positive effects beyond its singalongability. He sings in the first verse: “People keep on saying the songs that they’ve been playing will never ever change the world.” He acknowledges that some of his bandmates are more political than he is, though.

“There are two camps in pop: one is, if you’ve got the platform, you should use it. The other is that it’s entertainment, meant to take people away from politics. I think we reside in the grey area in the middle,” he says. “I keep having to explain to the others – especially Simon [Rix, bassist] – that at least half the people buying our records won’t agree with you. He says you’ve got to make a stand, but I say, for the hour and a half we’re on stage, I don’t really want to piss off 50 per cent of the audience.”

He wants to be liked one-to-one too, sharing a coffee in his management’s Shoreditch office, swapping dog pictures and teenage war stories about the Britpop years. That amiability is a major reason why, when so many bands from the previous decade have fizzled, Kaiser Chiefs are about to perform with The Who at Wembley Stadium and will soon announce another London show at the O2 Arena. I’m surprised to learn from him that Kaiser Chiefs were actually the first ever act to perform at the O2 in 2007, at a private gig for staff and friends the day before Bon Jovi played the official opening night.

Tomorrow night they headline at the Elland Road football stadium in their home town, a feat they also managed in 2008. “We’ve really clung on,” he says. “When I saw my mortgage advisor, the first thing he said was, ‘Plan for it not to last any longer than five years.’ I don’t really understand how we’ve kept going.”

It’s especially impressive given that their last hit single was Never Miss a Beat in 2008, and Nick Hodgson, their drummer and chief songwriter, quit in 2012 to concentrate on writing for others. They’re not in touch now. Many would have written them off at that point, I tell him. “I did too, for about three weeks,” he says. “You start thinking, ‘What am I gonna do?’ So I did War of the Worlds.” He sang and acted as the Artilleryman in Jeff Wayne’s musical on a tour of UK arenas in late 2012.

It was the first of a range of decisions calculated to keep him, and by extension his band, in the public eye. Most notably, between 2014 and 2016 he was one of the four judges on the Saturday night talent show The Voice on BBC One, sitting with will.i.am and Tom Jones, plus Kylie Minogue, Rita Ora and Boy George. “I knew that I had to get on TV somehow. My only rule was, if you’re going to do reality, always judge, don’t be judged. I’d been offered Strictly every year. I’m not doing that! I don’t want my name next to a phone number.”

Instead he proved a charming, funny mentor to two winners out of three series. It allowed him to step out of the indie guitar world, where you’re supposed to look miserable even if you’re having the time of your life, and in retrospect, he thoroughly enjoyed being a prime time telly star. “You’re in posh cars going everywhere, everything’s done for you. It was so exciting, this different world,” he says. “Also, my role on The Voice was as the least famous one, which I was very happy about. It must be horrible to be the most famous person in a situation. If you’re the most famous person at something, you probably shouldn’t be there.”

He didn’t stay with the show when it moved to ITV. Other broadcast work has included hosting a music-themed panel show on Sky, Bring the Noise, which was cancelled after one series in 2015, plus an episode of Bake Off for Stand Up to Cancer, two years presenting a Sunday show on Radio X and, currently, semi-regular deputising on Radio 2. “I enjoy that, but I can’t have anything permanent right now,” he says. “I can have a foot in both worlds, but I’ve got both feet firmly in Kaiser Chiefs at the moment.”

He’ll be a bit more distracted come August, when he and stylist Grace Zito get married, but after that it’ll be back to keeping his band a going concern into a third decade. It’s a surprising place to be, but as we’ve seen, he’s got used to popping up in surprising places. “You do feel, ‘I’m not supposed to be here,’ but that’s where Kaiser Chiefs have always been,” he says. “If you think you’re not supposed to be somewhere, you’re pushing the limits of what you should be doing, so you’re probably in the right place.”

Duck is released on July 26 on Polydor. Kaiser Chiefs support The Who on July 6, Wembley Stadium, HA9 (livenation.co.uk)