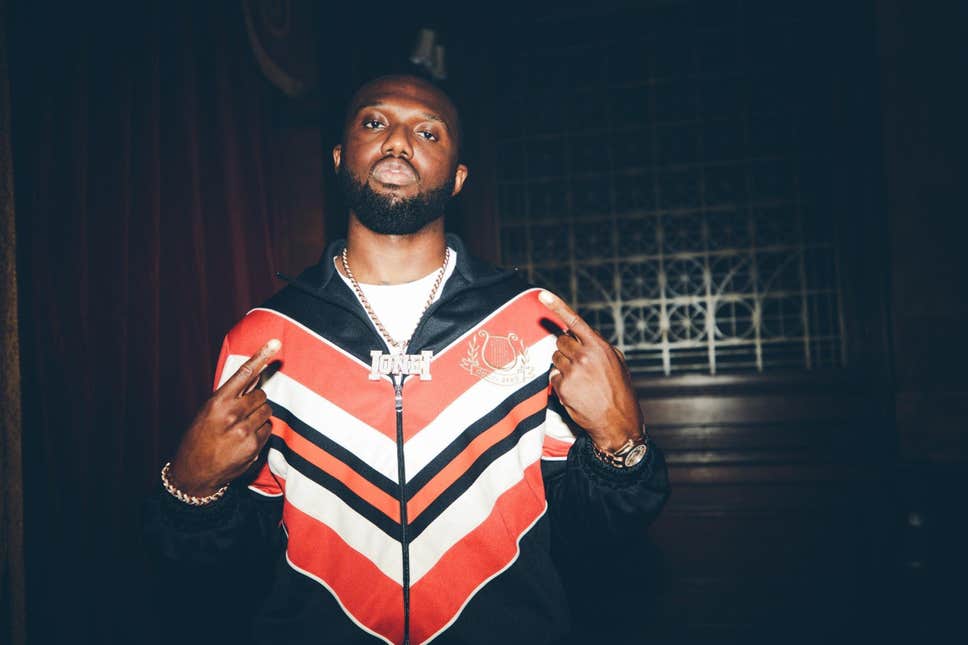 Headie One apparently got his nickname because his head looks like a 50 pence piece, but it’s hard to tell as the Tottenham rapper descends the backstage stairs in Brighton’s Concorde 2 venue. At the latest stop on a headline tour that will culminate at Brixton Academy next week, his biggest show yet, he’s got the hood of his wide black coat up and a scarf covering the lower half of his face – sleepy, downturned eyes the only things visible. I get an awkward handshake with his left, as the right is looking for somewhere to dispose of a chicken wing, and follow a small entourage – manager, marketing person, publicist, photographer and videographer – through torrential rain to the tour bus outside, where he tells me he’ll be giving me 15 minutes so he can get back to his food.

So far, so mildly intimidating – probably as it should be for the man who has become the biggest success story in the rap sub-genre known as drill. The style, characterised by a minimal, haunting electronic backing and violent lyrics, has had links with crime and gangs since it originated in Chicago at the start of this decade. The Metropolitan Police has had certain drill videos taken down from YouTube, saying the music encourages serious violence.

Headie himself has the requisite backstory: he only began taking his music seriously at the start of 2017, after he was released from his third stint in prison. In March last year he was removed from the bill of a rap showcase at the Barbican Centre after a risk assessment by police. But as his star rises, he’s distancing himself from the scene somewhat and exploring a more varied sonic palette on his latest mixtape, Music x Road.

“I just make music,” he says, coat and scarf removed, when asked for a definition of his style today. “I listen to all different kinds – R&B, soul, rap, trap, drill, garage… I’m open to new sounds. I feel like I’m capable of doing whatever I put my mind to. If I just stuck to drill, I’d be holding back my talent.”

He recently spent eight weeks in the top 20 with probably his poppiest song, Both, which samples Ultra Nate’s 1997 dance hit, Free. It’s catchy, but the slurred, slang-heavy words aren’t dialled down for the charts. He talks about life in prison, “scrambling eggs in a kettle”, and bagging up drugs including coke on long afternoons in the “T house”.

The dialect is so dense and obtuse that it could be easy for this stuff to drift by on the radio for a casual listener. His breakthrough song, Know Better, practised self-censorship with distinctive use of the noise “Shhh”. But his stark collaboration with Mercury Prize winner Dave, 18HUNNA, which became drill’s first top 10 hit in January of this year, is surely the only chart hit in history to make reference (in the chorus!) to someone accidentally flushing drugs, hidden in their backside, down the toilet while defecating.

“I think people liked it because it’s raw,” he says of his biggest song to date. “It’s just straight to the point. It’s real. That’s what happens in certain scenarios. I’m just talking about real life situations and putting it out. People can put their own perspective and opinions on it.”

Headie One was born Irving Adjei 25 years ago and grew up in Broadwater Farm in Tottenham, an estate which became national news in 1985 after rioting led to the death of police officer Keith Blakelock. He liked it when he was little. “It was very family-oriented when you were young. You’d be out together with all the other children from age four or five,” he says. “Everyone knows each other from kids. All I knew was the estate really. Everything we needed was there: corner shop, our friends, our school. It was like our own little world. I didn’t really need to go anywhere else.”

He loved football, supporting Man Utd like his older cousins, playing for his school team as well as Haringey Borough and being invited for trials at Stevenage FC. But an ankle injury put paid to that. He experienced the darker side of his area as he got older. “No one wants to be there. When I speak to people who are still there now, their dream is to leave. It’s not the greatest place, not the most positive. When they’re given an opportunity to move away, they take it.”

Asked where he lives now, he replies, “In the sky,” so it clearly isn’t knowledge for public consumption. Last week he tweeted: “Lol I never had as much enemies as I have right now at this point in my life I wonder why.” On the title track of Music x Road, he raps: “Now I just play backwards and forwards you know/I still walk the thin line between music and road.” Road being his old life.

He began trying his hand at freestyle rapping when he was locked up. “I did it when I was away, but nothing too serious. People would tell me I was good. I didn’t really know, I was just experimenting,” he says. “When I was out, January 2017, I didn’t waste no time. My first day out I done a video shoot the same day. I was straight into the studio. The next day, straight in again. Since then, every opportunity to make music, I’ve been making it. I’d wasted a lot of time in the past being in negative situations.”

He’s made five mixtapes since 2017, two of them joint efforts with his regular collaborator RV. Unlike many UK rappers who remain independent, in 2018 he signed a major label record deal with Relentless, also home to more mainstream artists such as Tom Walker. “I’m not about following the crowd or copying what anyone else is doing. I didn’t really know a lot about the music business. I was just a guy out of prison. So it felt like the right thing to do at the time,” he tells me.

How long before music was providing his sole income? “It’s a thin line. It’s a long road. There’s a lot of people don’t make it across that thin line. But you know when it’s time to make the changeover.”

He’s clearly doing well, anyway. He’s just back from a holiday in Dubai. On his wrist is a gleaming Rolex. A large chain around his neck features the jewelled word “ONE” with a wide “H” behind it. I excel myself by asking who “Ionei” is.

Big names including Krept & Konan, Stefflon Don and an older Tottenham rap star, Skepta, all feature on the most recent mixtape. He’s zooming away from drill’s dark, insular world, and wants others to follow his path rather than being banned from making their music. “A lot of people don’t really have a lot of hope, so if they’re doing something, I don’t think it’s fair to put a stop to it because music would be a lot of people’s only way out,” he says. “You shouldn’t be restricted on what you’re trying to express. If someone’s trying to make an opportunity for themselves, I don’t think the answer is to completely stop them from doing it.”

For him, this tour bus is a great place to be while the rain pelts down outside. What’s his favourite part of the job? “I like being able to think back to where I was a couple of years ago and seeing the progression,” he replies. “That’s the most satisfying part for me. Everything else is just extra.”