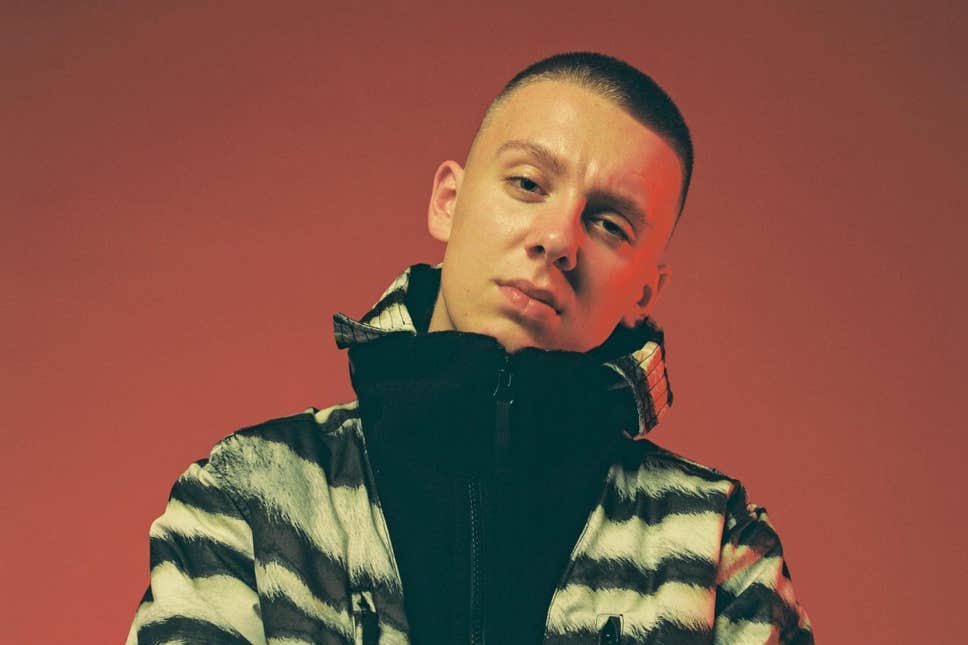 Aitch is an hour and a half late to meet me because he says he’s having an emergency at the barber’s. This seems unlikely given that the teenage rapper’s hair is generally putting green short, but when he finally shows up at his management’s office – a chilly shipping container on a Manchester industrial estate – he explains.

During a photoshoot the day before, he’d applied some black dye with his fingers to make his crop look thicker under the powerful lights. “When I woke up this morning, I was ginger,” he says. “I can’t go on tour ginger!”

Multiple dye applications later, he’s back to his old self, looking back with a cheeky grin on a year that has seen him make a strong case for being the hottest rapper in Britain. With an undiluted Manc accent that helps him to stand far apart from the massed lyricists down here, in early October he was on three singles in the UK top 10 simultaneously – as a guest on Strike a Pose by Nottingham duo Young T & Bugsey, on a second version of the Ed Sheeran and Stormzy track Take Me Back to London, and on his own Taste (Make It Shake). Four weeks later another of his singles, the bouncy Buss Down, cracked the top 10 as well, and last week he entered the top 40 yet again with a verse on ZieZie’s French Kisses. He turns 20 in three days’ time.

“It’s definitely been the best year ever but it’s gone so fast. I feel like I blinked and I’m here,” he says. “This year changed my life – deffo. Hopefully next year’s even better, fingers crossed. This one’s gonna be hard to beat though.”

Born Harrison Armstrong (Aitch is his first initial, unlike the other musical H, Ian Watkins from Steps) and brought up in New Moston to the north-east of Manchester city centre, videos of him rapping in the street began appearing in mid-2016 on YouTube channels such as One Way TV and P110. In the summer of 2017 he couldn’t help but stand out in a special Manchester edition of the long-running grime series Risky Roadz. He was the only white guy and looked a decade younger than the others too.

“I was always the younger one, but I kept up with everyone else,” he tells me. “I was like the young guy, but everyone was saying, ‘This kid’s just merking it, he’s taking over, we need to step up.’ Then I think I stopped being seen as a kid.”

He released a seven-track EP, On Your Marks, at the end of 2017, but it was his edgy song Straight Rhymez that saw the beginning of real lift-off in mid-2018. Filmed in a car park at the back of an estate, the video has now been seen over 16 million times.

Now everything he touches sells big. Does it feel easy? He’s not exactly changing the world with his lyrics, which mostly seem to be about having sex and filming the experience. “I know I’m too rude, but I’m young so that’s my excuse,” he rapped on another video series, GRM Daily’s Daily Duppy.

“It has been hard work, but don’t get it twisted, it’s definitely been fun,” he says. “I think a lot of people presume, because everything happened so quick, that it’s all been easy, but it’s not.”

Even so, it sounds like a nice life. He’s wearing a large blue Marshall Artist jacket, a Manchester-based company for whom he has modelled. A chunky Rolex peeps out from his sleeve. The floor of the office is scattered with bulging parcels of clothes, still to be opened. He recently moved out from the home he shared with his mum and two younger sisters to his own place, and says he hasn’t cooked there yet.

When we meet he’s about to set off on the latest leg of his tour, which includes his biggest London show so far, at the Forum in Kentish Town. When he visits other towns he gets a more tangible sense of the scale of his appeal. After he was spotted in Nando’s in Dublin in September, he and his team had to sneak out through the kitchens to a taxi primed by the back door. Even then, one boy ran so hard that he beat them back to their hotel.

“I can still go out to the shops. It just takes me longer than everyone else,” he reflects. “I don’t get mobbed so much in the area where I grew up, but otherwise it’s everywhere I go, literally. It wasn’t the first thing on my mind: ‘I want to be famous.’ But I definitely don’t mind.”

His rising profile led to Ed Sheeran contacting him, first via Instagram and then on the phone. “He called me off his friend’s phone ‘cause Ed doesn’t have a phone,” says Aitch. “He said he liked my song Trust me, which is an old one no one even listens to. I was gassed.”

Sheeran wanted to make a new version of his latest number one, Take Me Back to London, that would have greater appeal to those in the regions. So he invited Aitch and Jaykae, who is from Birmingham, to add verses. Jaykae referenced local stars UB40 while Aitch offered some useful advice to soft Londoners: “Gets cold up north, pack your hat and trackie.”

The song’s success meant that Aitch could claim to have kept himself off the number one spot when Taste (Make It Shake) reached number two in September, and also swelled his fanbase. “That was a hot point for me anyway. I was rolling. Then that song gave me an extra push. It definitely opened up a wider audience. I had 30-, 40-year-old people coming up to me saying they love that song. And opened a wider audience to Manchester, hopefully.”

He’s quick to praise other current Manchester acts such as Bugzy Malone, Geko and IAMDDB, but is less clear on the connection with the city’s rich rock heritage. “Obviously I missed all that – Oasis, The Stone Roses. Don’t get it twisted – I could still belt out a whole Stone Roses song if you wanted me to. It was always a scene everyone knew about, but for people my age it’s in the past, something your mum and dad listen to.”

Next year, big plans: he’s been taking meetings in LA. Given that all English accents just sound English to Americans, his distinctive style shouldn’t hold him back over there. He promises a new “project”, but not yet an album, to follow his eight-track EP AitcH20, which went to number three in September. And he still needs a number one song all of his own. “I think a number one will come to me,” he says, blue eyes glinting. “Yeah, we need to be bigger than this. I can’t settle for this.”