One of the most powerful aspects of Twitter is the way it can change people’s stature in your eyes if they’re good at it. Example didn’t really register on my pop order of preference until I started following him online. Now it’s all I can do to keep from putting at least three LOL-worthy quotes from him in this page’s Tweet Talk column every week.

When we meet in a Kensington pub, the rapper and singer born Elliot Gleave (EG — Example — you see?) is finding that his digital influence — 1.5 million followers and counting — has both pleasures and drawbacks. Last Friday he was the first musician to be invited to Twitter’s London headquarters to take a Q&A with staff about how they can improve the service.

“They think I’m one of the best people on Twitter in the UK so they wanted to know how I use it and how I’d change it,” he tells me. At the same time, according to other parts of the press, he’s currently “at war” with the entire town of Wigan, having written: “What Twitter needs is a block button for the whole of Wigan, most abuse I get comes from Wigan. Are there any nice people in Wigan?”. “BAD EXAMPLE: Rapper manages to insult whole town” screamed the headline on the front page of Wednesday’s Wigan Evening Post.

But it’s Example who would know an insult when he sees one. He gets so many directed at him daily that he has no choice but to see the funny side. “I get between 8,000 and 12,000 tweets a day, and of those probably 500 are abuse. I get a couple of death threats every day as well. It makes you very thick-skinned. If I was a 16-year-old girl who’d just entered the pop world, that would affect me. But I’m a 30-year-old man.”

A big man, too, dressed all in black and looking increasingly like a proper rock star as he prepares to release his fourth album. It’s been a meandering journey from the humorous geezer-hop of his 2007 debut, when he was signed to Mike Skinner’s The Beats label and billed as the new Streets,  to his realisation that he could sing on his first top-20 hit, the pretty piano house of Watch the Sun Come Up in 2009. Now signed to venerable dance label Ministry of Sound, he’s been producing trancey pop with more thoughtful lyrics than the usual hands-in-the-air froth, earning two No 1 singles in succession last year.

But this time around he’s getting really serious. The Evolution of Man is going to shock much of his fanbase. The opening track, Come Taste the Rainbow, begins with a mean metal guitar riff and goes on to list drugs including “cocaine, ketamine” and possibly the first use of the word “methylenedioxymethamphetamine” in song. It’s dark and heavy and just the beginning of a collection inspired by six therapy sessions, in the second half of last year, that were the end result of him enjoying his chart success rather too much. Song titles such as All My Lows and Crying Out for Help speak for themselves, which is how he wants it.

“After this record comes out I don’t want to do any more interviews about drugs or therapy or not being faithful,” he says. “It’s all there on the album. There’s nothing better than to lay it all bare on a track.”

He admitted he had a drug problem after a summer of partying hard in 2011, but today he plays down the extent of his difficulties. “I was just lonely because my mum and dad and sister were on the other side of the world [his parents emigrated to Australia six years ago] and I’d split up with my girlfriend.”

On the album, he doesn’t make it sound much fun. “I chose to spend my wages on the class they call the A and every day I made some brand new friends but can’t recall their names,” he raps on Are You Sitting Comfortably? It sounds like the Prodigy or Rage Against the Machine, a name he drops several times during our conversation. “There’s blues, grunge, prog rock, metal, but also rap and dubstep and house and techno — it’s all on there,” he says. “There are people who bunch me in with the current chart stuff but I think I’ve got my own thing going on. At gigs we want to play like our idols — Foo Fighters, Rage Against the Machine, Metallica. We don’t even really look at other pop shows.”

Occasionally he strays towards the much maligned rap-rock, nu-metal sound of a decade ago, and he also runs the risk of being criticised as the pop guy trying to rock out like the big boys. Even so, he already has a couple of credible thumbs-up on the album — Blur’s Graham Coxon plays guitar on four tracks.

They met after Coxon’s nephew asked for a picture with Example at a War Child gig at Shepherd’s Bush Empire in February. “Then I messaged him on Twitter: ‘Can I come and play you my album? I want you to play guitar on it.’ It was really simple, actually. I’ve always done that, just been a bit cheeky and approached people I wanted to work with directly.”

Radio 1 DJ Zane Lowe is also involved, having a rare go at production on Blood from a Stone. “He’s been kind of a bedroom producer for years. He’s always been a great supporter of my music but I wouldn’t do him any special favours as it’s him. We agreed that if I didn’t like it I didn’t have to use it.”

He is not worried about alienating fans with a new direction, as he’s confident he’ll convert a few new ones too. “The danger is making the same record as before, and losing fans because people are already bored with that style. I think it’s something really fresh in the current chart and it’s something I really wanted to do, as well.”

The rock style extends to his gigs, where costume changes and dancing girls are banned. “We just play through, it’s really raw. We’ve got enough energy between the drums, the guitar, the bass and me. We don’t need a massive screen with a load of LEDs.”

He bounces around so hard that he’s currently getting shockwave therapy for Achilles tendonitis in both legs, a condition that forced him to postpone nine shows last month. He’ll be back in London for a big show in February, his second arena set after an O2 show last spring.

Yet apart from ongoing physical pain and an album that looks closely at a messy period in his life, this Fulham lad has plenty to be happy about. Late last year he got together with Erin McNaught, a TV presenter and Miss Australia 2006, and life is much calmer.

“There are no two-day benders or staying up till 8am any more. It’s usually just a nice meal followed by some cocktails. You’re not going to go out with your girlfriend and end up in a strip club or some nasty warehouse rave in Hackney full of a load of crackheads.”

It sounds like the next album might be less gripping lyrically but at least he’s on a level footing. “I went off the rails, went to the other side of the rainbow, partied. Now I’m back again.” 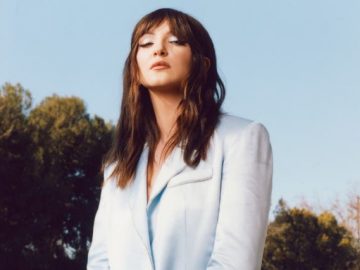