Before you meet Angel Olsen, the St Louis singer-songwriter whose third album, My Woman, was one of the very best of last year, you are sent a “fact sheet”. It’s a list of her significant releases, her date of birth (she’s 30) and a collection of details that reads less like a helpful primer and more like a strong hint that these are the things she hates being asked over and over. No, she has never listened to Joni Mitchell. She has many influences, ranging from grunge to psych to jazz to folk. Her writing process changes from song to song. The sheet explains that The Cairo Gang is, strictly speaking, a person, and not a backing band of which she was ever a member, in the exasperated manner of someone telling you that Big Ben is a bell, not a clock.

Did she write the list? “Oh I wrote it,” she says firmly. “It’s stuff that not only am I tired of being asked about, but I know that not everyone does their research and I don’t assume that people have the time to know that a question has been asked a million times.”

As if I wasn’t already fairly intimidated. My Woman placed Olsen as one of rock’s feminist figureheads, a widescreen, ambitious collection that saw her, on the almost-eight-minute song Woman, howling: “I dare you to understand what makes me a woman.” It’s an album about more than its title suggests – relationship dynamics, desire, faulty connection, struggle – but it’s that topline, which she insisted be presented all in capitals in the streaming service listings, that she’s found herself talking about the most.

“The title is just one of the subjects. I pulled it from the song Woman because it was a ripper. It was weird, almost prog and psychedelic and soulful and on top of it, I’m discussing a relationship between two people who don’t have the same perspective,” she tells me. “I thought that was really powerful, so I was going to name the record Woman, but then I thought it might be even more powerful if I put a ‘My’ on it. It could mean all kinds of things.”

This time she took charge in a way that she hadn’t previously, supervising every stage of the mixing process and even directing the videos. These included a clip for the confident single, Shut Up Kiss Me, in which she displayed an unexpected fun side by rollerskating in a tinselly wig. “I wasn’t the boss in the past. I could have been if I had known what I wanted,” she says. “It was a lot on my shoulders. I felt like I had a fucking ulcer. But it also gave me this new energy.”

We meet in Brussels, where she’s kicking off her festival season as part of the city’s Les Nuits events. She plays with her formidable six-piece band in a large marquee in the Botanical Gardens – like an intense wedding reception. Next week she’ll continue her tour – her fourth for this album – with her biggest London headline show yet at the Roundhouse, then go on to Glastonbury and Wales’s similar but easier to get into Green Man festival.

In person she’s direct, sharp and confident, with a fast flowing conversation style that’s hard to interrupt. She talks out her own thought process at such length that sometimes she has to admit she can’t remember what the question was. She’s friendly though, and unstarry, full of apologies to a young local support band when it turns out that the empty space we’ve selected for our interview is actually their dressing room. She’s happy to finish our conversation perched on some concrete stairs in a passageway filled with boxes of hand towels, a plastic glass of white wine with ice cubes untouched by her side.

My Woman is an album of two halves. In the first, she mixes gothic rock and the softer, spookier Twin Peaks atmospherics that she already did so well on her 2014 album, Burn Your Fire For No Witness. In the second, she really stretches out. The songs get longer, Stewart Bronaugh’s guitar burns and crackles, and her voice achieves an extraordinary range, from an inches-away whisper to a towering roar. It’s a huge step up, one that has earned great praise from the critics as well as more mainstream musicians such as Lorde and Florence Welch.

She knew it was good when she was making it in LA’s Vox Studios in the winter of 2015. “People were saying to me, ‘This is really different. It’s gonna be huge, and I don’t even wanna tell you because you already have an ego.’ I didn’t know if it was gonna be big or not, but it was a revelation for me and my singing.”

Since its recording half of her band have left to do other things – Bronaugh to his own band, Lion Lamb??, and guitarist Seth Kauffman to play with Jim James of My Morning Jacket. On tour she has three new bandmates: Luke Norton and Paul Sukeena on guitars, plus Heather McEntire on backing vocals and keyboards. “This is so much more amazing a band than I could have imagined,” she says of the current line-up. “I don’t think I could ever replace Stewart – his sound and tone is incredible – but the style of the songs has changed according to the musicians playing it. I had a huge sigh of relief during the first tour I had with this group.”

It sounds as if it’s not easy for her to be on the road, with the social demands and confined spaces of touring life. “I’m outward right now, and in my performances, but I don’t get a lot of energy from being around people.When I’m not on tour I’m REALLY not on tour,” she says. Unlike most US musicians, she hasn’t ended up in LA or New York but has been settled for the last three years in relatively tiny Asheville, North Carolina. “I’m a really different person when I’m in Asheville. I get completely absorbed in small town life: hiking, going to barbeques and bookstore readings.”

Before that she spent seven years building the foundations for a music career in Chicago, where she was briefly a member of influential indie folk musician Bonnie “Prince” Billy’s band. That’s another thing the fact sheet reveals she is bored of talking about. Angel is her real, adoptive name, from parents who brought her into their family to join seven much older brothers and sisters at the age of three.

Today she’s finding that making big music comes with other responsibilities. “I didn’t want to get political, and had no intention of even talking about feminism. I just wanted to talk about my record,” she says. “But the title brought it all up, and it was released around the time of the Presidential campaign, so wherever I went people were asking me about politics.” She went on the Women’s March in Asheville, and contributed a song to the Our First 100 Days project, which offers tracks to subscribers in order to benefit organisations that oppose the policies of the Trump administration. What makes her a woman? All these things and much more. Hear her roar.

My Woman is out now on Jagjaguwar. 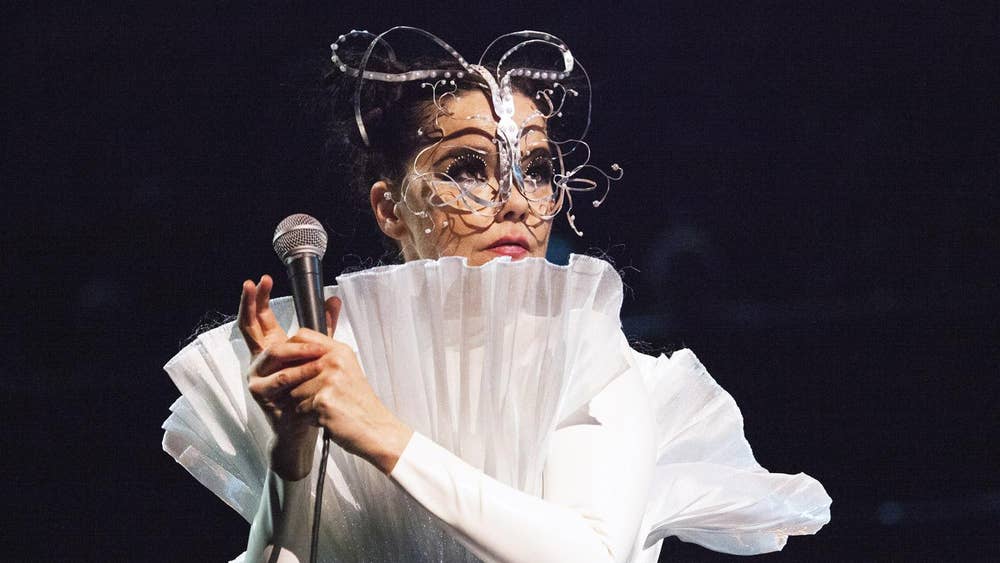