The last time I saw a queue snaking this far down Camden High Street, Prince was playing at the Electric Ballroom. Octavian, who is not one of Jacob Rees-Mogg’s children but a France-born, south London-raised rapper also known as Oliver Godji, first had to upgrade this show from the smaller Village Underground venue, then come on half an hour late so that everybody had time to get in.

The 22-year-old is still a newcomer, with no debut album in sight, a year since his song Party Here generated such reach that Drake filmed himself rapping along to it on Instagram. This month he put out 14 new songs on a mixtape called Spaceman, a title which is a neat summary of his sound. His music is minimal and spacious, with restrained synth touches and a starkness to his beats. It leaves plenty of room for his distinctive voice, rapping and singing with a slight croak as though always on the cusp of a cough.

He kept things simple here too, performing with a DJ and an occasional sideman – such a raw presentation that a confetti explosion at the end felt out of place. Over an hour he showed how much variety he can generate from so little, ranging from the relaxed singing of Stand Down to the dancey spark of Lightning, which saw him spinning across the stage.

That breakthrough song, Party Here, was a strange one to generate such a fevered crowd reaction, with its lurching beats and brutally simple bass melody. Move Me, a collaboration with electronica producer Mura Masa, was easier to dance to and proved equally popular.

He finished with Little, and its key line, “I got bigger, I used to be little.” To judge from the response this evening, he’s going to get a lot bigger than this. 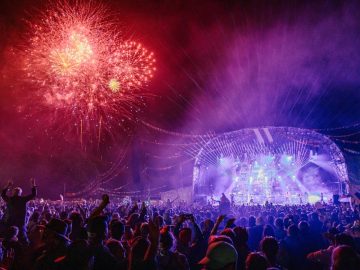