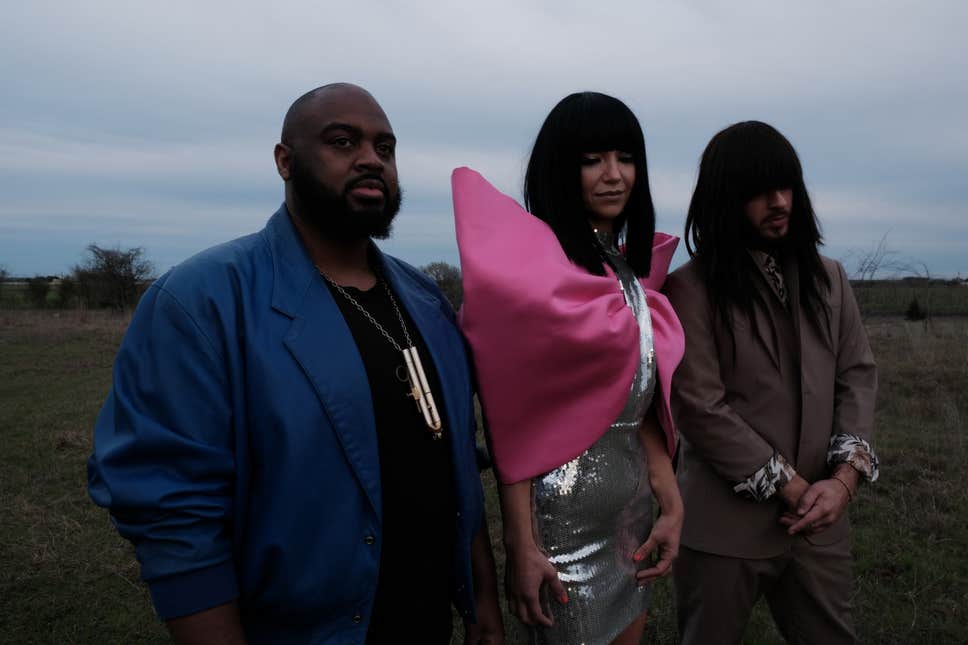 They’re only in their various homes on computer screens but the wigs are on for Khruangbin’s interview. Both bassist Laura Lee and guitarist Mark Speer sport heavy, feature-concealing black fringes and hair to their shoulders. Donald “DJ” Johnson has somehow avoided the requirement, maybe because he’s usually already obscured sufficiently at the back behind a drumkit.

“I don’t want to be famous,” is how Speer explains the look. For this conversation he’s disguised himself still further by sitting in a room lit by one dim red bulb. “I never wished for success. I just didn’t want to struggle to pay rent. I want to be able to live a normal life. If I walked down the street wearing this, people would recognise me and want to talk to me, and I don’t want to talk to anybody.”

With that gnarly name (Khruangbin is pronounced “Krung-bin” and means “airplane” in Thai) and largely instrumental guitar music that takes its inspiration from India and the Far and Middle East, it’s easy to believe the claim that they aren’t fame-hungry musical mercenaries. Nobody gets into making songs that sound like a late Seventies Bollywood soundtrack for the money. It’s doubtful they decided to record a dub version of their second album last year to fund a private jet habit.

Yet the Houston-formed trio are becoming increasingly significant. They headlined the 5,000-capacity Brixton Academy in December. Four of their songs have been played over 20 million times on Spotify, where they appear on playlists with titles such as Quarantine and Chill, Modern Psychedelia and – ahem – Weed & Trip. Their third album proper, released next week, sees them singing more frequently and upping the leisurely pace here and there. It’s a retro, funky, impeccably cool listen that ought to make them even bigger.

The only problem is, they have to promote it from their homes in Houston (DJ), Oakland California (Speer) and upstate New York (Lee) without the gigs that have done so much for their reputation. The three of them last played a show at Le Bataclan in Paris in December and haven’t been together in person since February. “I was in Houston briefly and saw DJ’s and our engineer’s cars and Mark’s truck all parked together – though they weren’t there – and immediately started crying,” says Lee.

They pushed the album release back by a month but didn’t want to wait any longer. “I feel like every time is equally bad and good to release,” says Speer. “It’s a nice exercise for us to put out a record and not tour and see what that feels like. We’ve been on the road constantly and it’s certainly helped our growth and success, but now we can see what The Beatles were talking about.”

After the Fab Four decided to quit touring in 1966 they had the brain space to get to Sgt. Pepper and beyond. For Khruangbin, it sounds more like they needed the stillness for their own sanity. “We’d been touring for four years, and I loved the adventure, but I think I got carried away with it without checking in with myself for a long time,” says Lee. “Last year I was feeling really lost as a human.”

The new album is named Mordechai – not after the Biblical king’s advisor who Book of Esther fans know and love, but after a new friend that Lee made while on a decompression camping trip last year. “He invited me to take a walk with his family because he could see that I was having a hard time, and he was like a little light in the darkness for me,” she explains. “He was an acquaintance and then a friend and a close friend. And now we’ve named an album after him, so we’d better be friends!”

The new music, though still led by the heavy groove of Lee’s bass and Speer’s ringing, exotic guitar lines, achieves a sharper focus here and there. Carrying on from Texas Sun, a gorgeous standalone EP which they released with Fort Worth soul singer Leon Bridges in February, vocals appear more prominently. Dearest Alfred lifts its lyrics from letters discovered by Lee’s family from her grandfather to his brother. Time (You and I) is a strutting disco number featuring the three bandmates chanting in unison. On the Latin funk of Pelota, they sing in Spanish about a ball, but won’t explain why.

“’Pelota’ is just way more fun to sing than ‘ball’. It’s a semi-nonsensical song and it’s supposed to be fun,” says Lee.

“I’m never going to tell somebody that their interpretation of a song is wrong,” adds Speer. “That ruins the experience for everybody. The more wrong information there is out there about our songs, the better. It creates a richer tapestry.”

However, he will answer my question about how they came up with song titles for a few of the instrumentals. “August 10 is named for the day that we wrote it. The Number 4 was the fourth song that we ever wrote. The Infamous Bill is called that because the drum break we sampled for the demo was from a Bill Withers song, and A Calf Born in Winter was titled for a calf that was born on the property where the barn is.”

The barn is the place where they make all their music. It’s on a farm that Speer’s parents own in Burton, a tiny town 85 miles west of Houston. The trio opted out of expensive rehearsal spaces in the city where they might have to compete with louder bands in the next room. That isolation, away from the conventions of recording, goes some way to explaining their unorthodox sound.

“It rains, you hear birds and cows. Maybe you’re in the middle of a perfect take and the train goes by so you have to start over. That’s life. It’s nice when things aren’t perfect,” says Lee.

In any case, in a “perfect” world, wig-wearing Texans making music that sounds like it was retrieved from a nightclub in pre-revolutionary Iran wouldn’t be quite such a big deal. And who wants to live in a world like that?

Khruangbin’s new album Mordechai is released on June 26 on Dead Oceans. The single Pelota is out this week.