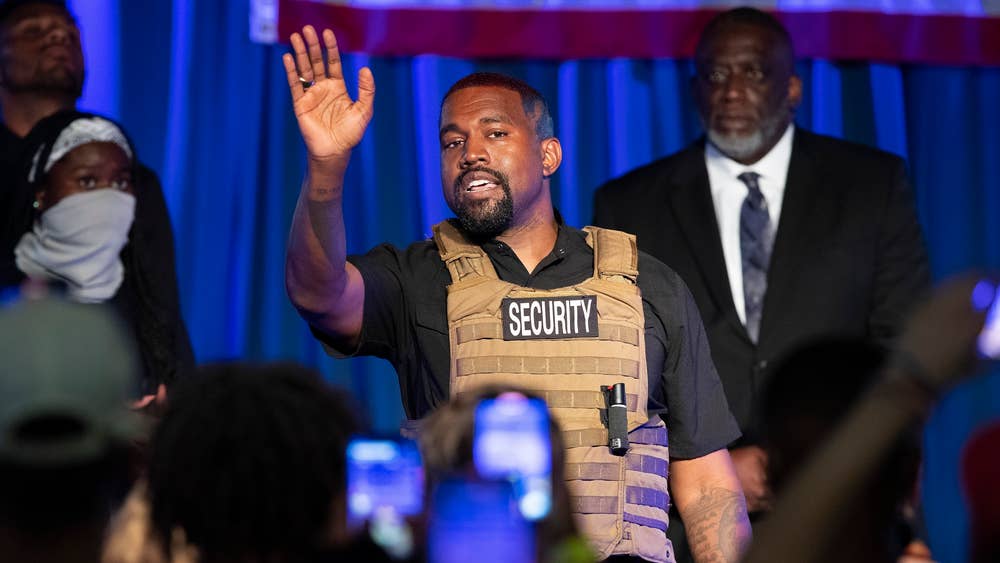 In the run-up to the release of a new album, it’s standard practice for musicians to make as many public appearances as possible, give interviews to the press and use social media to excess. Up to now, that hasn’t included holding an impromptu rally as a potential Presidential candidate, telling a business magazine that a coronavirus vaccine would be “the mark of the beast” and tweeting that you’re trying to divorce your wife.

Plenty of observers have found Kanye West’s long history of erratic behaviour to be entertainment, ever since his on stage humiliation of Taylor Swift, at an awards ceremony in 2009, caused even the usually diplomatic Barack Obama to label him a “jackass”. His tweets are termed “rants”, his Presidential bid, announced on July 4, a “self-centred publicity stunt”. The celebrity gossip website TMZ has run 14 different stories about him in the past week.

Even by West’s standards, there has been a lot to talk about. On Sunday he launched his candidacy with an improvised, unamplified speech in Charleston, South Carolina, where he proposed that “everybody that has a baby gets a million dollars” and wept as he spoke about how close he and his wife, Kim Kardashian West, came to aborting their daughter North. Then a flurry of (since deleted) tweets sent from his Wyoming ranch on Monday evening included the statement: “Kim was trying to fly to Wyoming with a doctor to lock me up like on the movie Get Out because I cried about saving my daughter’s life yesterday.”

Even Kardashian West made a rare public statement on her husband’s mental health on Wednesday, reminding those who would laugh at his grand pronouncements that he suffers from bipolar disorder and requesting “compassion and empathy” from the media and public. Those, like me, who are close to someone who has bipolar disorder, might agree that believing you are capable of becoming the American President, while also being too disorganised with the paperwork to begin the process properly, is sadly recognisable behaviour.

A looming major event – a birthday, a holiday – can prompt a manic episode. The arrival of a new album would certainly fall under that category. West’s most recent recordings have been characterised by missed release dates, changed titles and controversial statements in the run-up. Just before the 2016 release of The Life of Pablo, an album which he continued to alter even after it had arrived on streaming services, he tweeted: “BILL COSBY INNOCENT !!!!!!!!!!” The cover of Ye, from 2018, was snapped on his iPhone on his way to the finished album’s listening party. Jesus is King, his Christianity-themed album from last October, was first called Yandhi and was supposed to come out in September and then November of 2018.

So at the time of writing, it’s easy to assume that his tenth album, Donda: With Child, won’t arrive today as he proposed earlier this week – never mind the movie he also says he’s made. He has already announced two different tracklistings, one of 20 songs and another of 12. Possibly to make him look bad, yesterday his old adversary Taylor Swift announced a surprise album for today as well. There was no doubt she would be bang on time.

However, unpredictable though he may be, he can never be written off. A new single, Wash Us in the Blood, was released at the end of last month and was fantastic. Comprised of siren sounds, frantic drums, shouted vocal samples and rapid rapping from West and Travis Scott, it was both religious and political and featured the lines: “They don’t want Kanye to be Kanye… They tryna sign a calm Ye.” It was a reminder that none of this is really a publicity stunt. It’s simply who he is.

I was there at the Forum in Los Angeles in November 2016, one of his last shows before he was hospitalised for “temporary psychosis due to sleep deprivation and dehydration” and cancelled the remaining 21 dates of his Saint Pablo Tour. What was most evident was the uniqueness of his vision as he performed on a mobile platform suspended from the ceiling – him in the shadows, the audience illuminated beneath.

As he said on his song Feedback that year: “Name one genius that ain’t crazy.” Having bipolar disorder is a state of extreme highs and lows. We can all hope for more flights of musical genius like the many he has had in the past, but it would be better if he can get the help he needs to find a safe place somewhere in between.