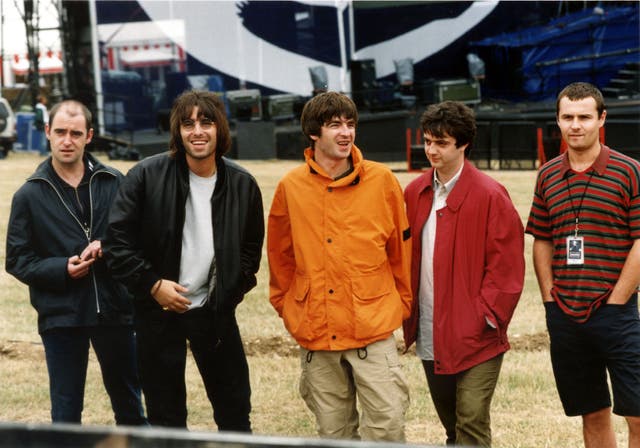 “Where were you while we were getting high?” Liam Gallagher asked in the Oasis epic Champagne Supernova. Personally, I was deep in the throng of 125,000 fans at the first of the band’s two shows at Knebworth House in Hertfordshire, dying of thirst and desperate to fight my way to a far off portaloo, but also ecstatic to witness the pinnacle of one of the most extraordinary ascents in rock.

“This is history!” Noel Gallagher shouted as he arrived on the expansive stage. Characteristically boastful, yes, but we knew it was true at the time from one look at the stats: over two per cent of the UK population tried to get tickets to the biggest gigs of the decade. Having baulked at the idea that they might dare to put three nights on sale, the Manchester quintet later learned they could have set up shop for a week or more. They arrived by helicopter and left in a daze, just two years and four months since the release of their debut single. No wonder they got the bends.

It was August 10 1996 – 25 years ago today. I wasn’t a music writer then, just a university student, so no guestlist passes or VIP hobnobbing with Kate Moss and Mick Hucknall. I wasn’t watching it semi-detached, with one eye on what it all meant to the wider culture. It was purely a big day out – the biggest – as a genuine fan.

It really is history now that the event is the subject of a new documentary, in cinemas next month. “It was the last great gathering of the people before the birth of the internet,” Noel claimed in a 2016 film about the band’s early days, Supersonic. The reality of that was a May morning spent hitting redial on our landline instead of refresh on a web browser, trying to get those tickets by speaking to a real human, and never daring to separate from my friends on the site because none of us had mobile phones. It feels like such a distant time that the film might as well be in black and white, especially after a year in which large crowds have been unthinkable and a mass gathering means slagging off Piers Morgan on Twitter.

Because that’s what the Oasis phenomenon was: a coming together of the people like iron filings to a magnet. Before their rise, my experiences as a music fan had felt like being in on an amazing secret. You recognised each other by a T-shirt, a haircut, an esoteric band logo Tippexed on a school bag. DMs were Dr Martens boots, preferably hideously scuffed, not a means of contacting an influencer on Instagram.

Relatively recent alternative rock successes The Smiths and The Stone Roses, popular as they were (the Roses’ chaotic 1990 show at Spike Island was an obvious forerunner to Knebworth) still felt like cult interests. Suede’s 1993 debut was a fast-selling number one but Brett Anderson wasn’t on the news or in the tabloids. If you liked this kind of music you had to hunt it out on late night TV shows and in specialist magazines that were so full of in-jokes it felt like they were written in hieroglyphics. If you got to catch these groups on Top of the Pops, you’d lucked out.

Then, suddenly, my parents knew this new band by their names, or at least the two loutish brothers in all the photos. They could hum the tunes. They watched the Blur v Oasis singles chart battle of August 1995 on the evening news, when fans were expected to show allegiance to one band or the other by buying either Country House (rubbish) or Roll With It (equally rubbish). Your parents’ job used to be to hate this stuff! When my mum, as a teenager, brought a Rolling Stones album home, my grannie made her take it back to the shop because as far as she was vaguely aware they were basically sex criminals.

In May 1995, the local football team I supported, Reading, reached the First Division play-off final, at that time the closest they had ever come to entering the Premier League. In that moment the whole town suddenly loved football. People travelled to the game against Bolton Wanderers at Wembley Stadium who had never been to a match before. It was a height we had never reached previously and even though we lost, the day felt incredible.

That’s what Knebworth felt like too: against unlikely odds absolutely everybody enjoying the same thing, all divisions of taste obliterated by towering melodies and a wall of guitars. It was a Royal wedding. It was Star Wars.

The realities of the day were less miraculous. I remember a hail of debris flying through the air: umbrellas, toys, clothes and of course plastic pint glasses. The band were only visible on the video screens, and the songs were all but drowned out by the exuberant lads all around us bellowing every word. Liam appeared to be wearing the top half of a judo robe. After the fireworks, we couldn’t find our car.

Looking back now, I’m a little embarrassed by how cool I thought they were. They were proudly drunk and violent, football hooligans with intruments, musical luddites next to their rivals Blur. They stole unashamedly from others on songs such as Cigarettes & Alcohol (T. Rex), Step Out (Stevie Wonder) and Whatever (The Beatles, always The Beatles, though it was Neil Innes who sued them for that one). Noel Gallagher had clearly attended the Cat Sat on the Mat School of Lyric Writing.

Leaving Knebworth Park, of course the only way was down. The third album, Be Here Now, came out in 1997 to staggering hype. There were some strong songs on it but they were all far too long and swamped in sonic excess. I had bought every one of their singles up to the first one from that album, the almost eight minute-long D’You Know What I Mean?, after which it just didn’t feel as exciting any more (did anyone really notice that Noel Gallagher’s High Flying Birds have just celebrated their tenth anniversary?). Radiohead’s OK Computer was also released in 1997 and showed that there was another way for rock music to be ambitious.

However, even Radiohead weren’t above the central idea of Knebworth: to gather as many of your fans as possible together in one physical space. They performed to around 40,000 in South Park in their home town, Oxford, in 2001. Many others have organised something similar – a festival all their own. There was Arctic Monkeys at Sheffield’s Don Valley Stadium in 2011, Kasabian in Leicester’s Victoria Park in 2014, even Blossoms playing Stockport’s Edgeley Park Stadium in 2019 after releasing just two albums.

Then there was Robbie Williams, of course, cocking a snook at Oasis by doing three nights at Knebworth in 2003. So why are those earlier shows the ones that most belong in the history books? Perhaps because they came about so incredibly fast, and so unexpectedly. The last alternative rock band to reach such mass appeal, Nirvana, had done it against their will and hated every second of it. Oasis drew everyone in, drinking every last drop of the experience and then licking the table. Doing it in the same place where the giants of old had walked – the Stones, Pink Floyd, Led Zeppelin – somehow put these oikish upstarts on the same level. I still can’t quite believe that it happened, and that I was really there.

Oasis Knebworth 1996 is in cinemas from Sep 23. Tickets at oasisknebworth1996.com