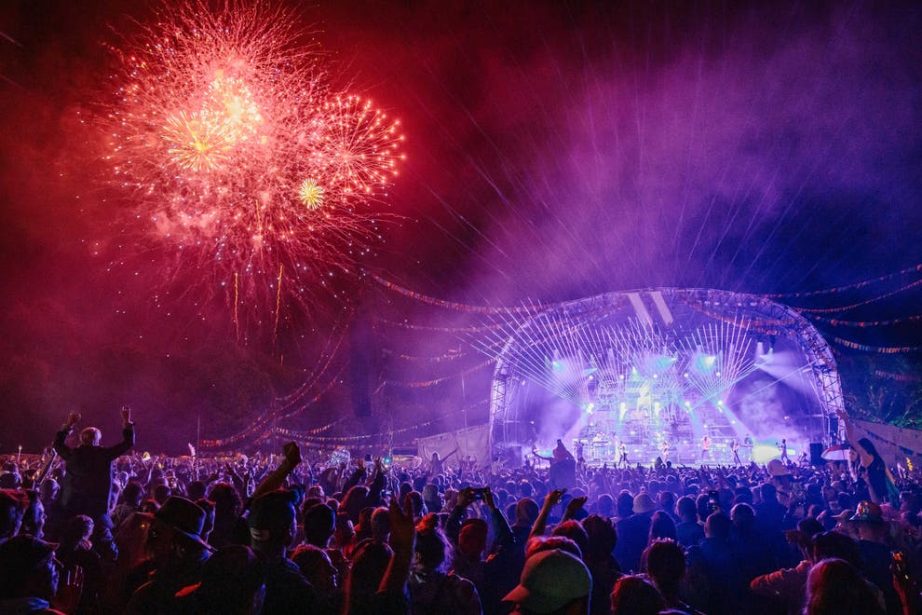 Aside from the extra layer of entry requirements – lateral flow tests to be completed, vaccination proof to be acquired – festival life felt very much back to normal at Oxfordshire’s decade-old Wilderness event this weekend. “Normal” being grown men dressed as inflatable dinosaurs, Michelin-starred chefs operating under canvas, mass participation hip hop karaoke, and the kind of intense Thursday afternoon rain that you can’t even hide from in your tent because you’re still putting it up. The only facemasks in evidence here were part of an elaborate costume and usually 90% glitter.

One of the industries hit hardest by the pandemic, music festivals, both literally and figuratively, aren’t out of the woods yet. Glastonbury, which has now cancelled two years running, recently abandoned plans for a special one-day event this September. Others including Womad, Kendal Calling, Truck festival and London’s BST Hyde Park concerts have also been forced to take a second year away. Talking to various people working at Wilderness, from organisers to stallholders, all alluded to how much more difficult it has been to make it happen this time.

But looking around, there was no sign of a lack of enthusiasm from attendees. I was expecting to see more mask wearing than I did, and extra space left in the food truck lines perhaps. Instead the crowds hurled themselves into the festival experience as though the last 18 months never happened. Caution was thrown to the wind, attacked with hammers and buried six feet under.

Cornbury Park was a stunning place to make a return to this life. There are two lakes for swimming, taking part in a paddleboard yoga class or sitting at the adjacent champagne bar. The after-hours clubbing area is situated in an incredible steep-sided valley. If you want to see more of the extensive surrounding woodland, a daily 10am running group will take you there. Or you could relax in front of the morning cricket match, with its comedy commentary and scoreboard that counts streakers.

If that all sounds a bit fancy, it is. Wilderness was set up by some of the people behind the more chaotic Secret Garden Party as they approached middle age and started thinking about appealing to more sophisticated tastes. You know a festival is posh when there’s a raised platform in front of the main stage with a sign that says: “Reserved: Lord Rotherwick”. Chefs from Cornwall’s Woodfired Canteen received a standing ovation to rival any of the bands at the end of a swanky opening night banquet.

The priorities of the weekend were evident in the way the different spaces were laid out: dining marquees, the sports field and a Forum tent for talks from authors such as Philip Pullman and Geoff Dyer, all near the centre. Way off at the other end was the main stage, where musicians were appreciated but far from the main focus. The only instantly familiar name for casual fans was probably Sunday night’s headliner, the rowdy dance collective Rudimental.

The empowerment pop of Self Esteem was a welcome surprise on Friday afternoon, a late replacement for the absent Holly Humberstone. Rapper Loyle Carner offered warm vibes and a wholesome message (“It’s okay to cry sometimes,” went one song) but was an odd choice as headliner, his hazy hip hop beats better suited to a sunny afternoon under the trees.

On Saturday, Georgia offered more visual excitement as she braved more rain to batter her drum pads during a mighty dance remix of Kate Bush’s Running Up That Hill. God obviously favoured Northern Irish electronic dup Bicep, augmenting their already impressive light show with a full rainbow directly above the curve of the stage roof. After that, a DJ set from Jamie xx felt a little anticlimactic.

But the crowd were unlikely to care too much. They seemed mainly to be here for the dressing up possibilities. The official festival theme, maximalism, appeared to involve wearing this year’s outfit and last year’s at the same time. Fluff, feathers, sequins and spandex all combined to make extraordinary sights at every turn. After going so long without seeing towering headdresses, illuminated fairy wings or a pack of people dressed as garden gnomes, this dazzling weekend felt all the sweeter.