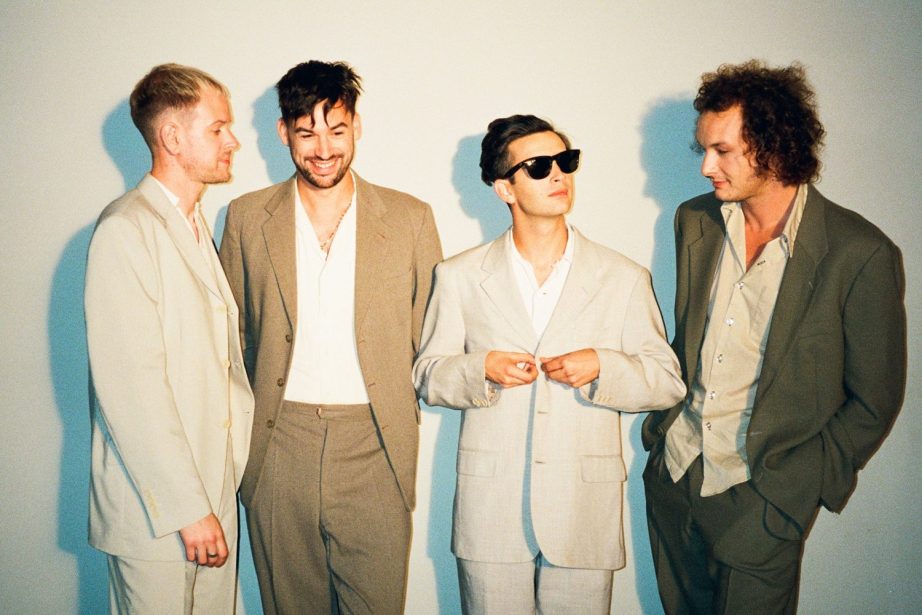 With their first album zooming straight into the No 1 slot the minute it was released last week, sell-out shows all over the country and excitable young fans who shout “We want Sex!” in order to hear the band’s hit song of that name, The 1975 couldn’t be hotter right now. In their singer, Matt Healy, they have the perfect leader to explain the situation. He might be the gobbiest musician since Noel Gallagher.

“The band don’t really talk. I talk — a lot,” says the 24-year-old in his mongrel accent — London-born, Newcastle- and Manchester-raised. After an hour in his entertaining company I do start to worry about the hind legs of any nearby donkeys. A skinny ringer for the actor James Franco, he’s lost in thoughts of what it all means, whether he’s happy enough about his dreams coming true and how on earth to follow such a powerful initial impact. To complete the furrowed philosopher look, he’s just bought six identical black turtlenecks to go with his hefty Doc Martens.

“It’s like a youthful holiday romance,” he says of his sudden stardom. “That holiday feels like the apocalypse — everything that preceded it or comes after it doesn’t matter. It’s only when you get home that you really understand it for what it was. And we haven’t been home!”

Now they live on a tour bus that reflects their sudden status, with its leather seats, 16 sleeping berths and a wholly unnecessary flatscreen television in the cubbyhole bathroom. There are only two other buses this long in the country, the driver tells me, and it’s a bugger to get around corners. Here Healy can be found holding court, the silent Adam Hann (guitar), Ross MacDonald (bass) and George Daniel (drums) busying themselves with soundchecks and coffee.

“They know there’s nothing I would say that they wouldn’t say. It’s kind of my vision but facilitated by the only people who know how to get what

I want.” School friends from Macclesfield, all 24 apart from 23-year-old Daniel, they’ve been playing together for a decade under various names in both punk and ambient permutations, before settling on what Healy describes as this “pop project”.

“We were just kids who loved records. We come from the middle- class, Renault Clio world of boredom,” he says. However, his childhood wasn’t exactly ordinary. He’s the eldest son of actor Tim Healy of Auf Wiedersehen, Pet fame, and Denise Welch, best known as a  Coronation Street icon and host of the Loose Women chat show. “Because of the North-East connection, we were knocking about with Sting and Dire Straits. One of the first guitars I played was the one used on [Dire Straits’ hit] Romeo and Juliet. Being a rock star was part of my reality.”

He left school at 16 and worked in call centres and cafés with no intention of being anything other than a musician. “I remember being about seven, watching a Michael Jackson video on my knees in front of the TV, and one of my dad’s salt-of-the-earth mates saying, ‘He’s like an alien, isn’t he?’ I thought, ‘I’m so much more like him than I am like you.’ I get Bowie, I get Prince, I get Michael Jackson. I know how they feel and what they’re trying to say.”

Of course he’s nowhere near that level yet, though he certainly talks a good game. The 1975 look like an indie band but there’s not much that’s alternative about the lightweight funk of their song Girls or the easy bounce of their biggest hit to date, Chocolate. Healy’s high singing voice and fresh looks could have earned him a boy-band audition, which could explain the teenage girls already sitting on the pavement at lunchtime, outside the Birmingham venue the band are playing on the day we meet.

Alongside recent big-sellers Bastille and Two Door Cinema Club (both of whom The 1975 have supported at gigs) they’ve brought a much poppier, more electronic sound to the band format. Healy admits that without the more biting guitars on the excellent next single, Sex, nobody would mistake his group for rock beasts. “I think soon we’ll become an easy band for the critics to have a go at because we’re very, very poppy and I wear my heart on my sleeve.”

Personally, I’d want to encourage, not bash them. While some of their peers are bland and forgettable, Britain could do with more musicians with big mouths and silly hair. “I don’t mind being talked about but

I don’t like it when people get me wrong and talk about me like I’ve got an agenda — as if I’m trying to be a pop star. I’m not even a performer. I’ve been writing songs for 10 years in my bedroom. Now I’m here,” says Healy. Perhaps for that reason, he’s a natural.

Now he’s making a connection with a swelling fanbase on a grand scale. There’s talk of a third Brixton Academy show to go with the two already booked, plus possibly a night at the Albert Hall, as well as Shepherd’s Bush Empire tonight.

Hopefully he can find a way to enjoy all this without overthinking it. “With every one of them landmarks, with every thing that we achieve, it takes me a little bit further away from being genuinely happy,” he claims. At least he has his mates around him. The rest of the band, the guy who makes the videos, the guy who does the lights and the guy who sells the

T-shirts are all friends of a decade or more. He stretches out in his fancy tour bus, safe in the knowledge that they are all nearby. “This bus is as close to home as we can get.”