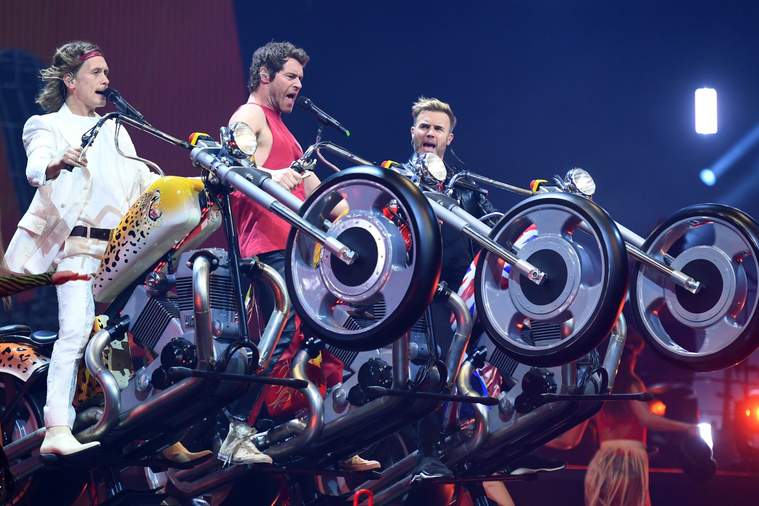 At the back door of the Manchester Arena, past two dozen hopeful women clutching cameraphones, past security scanners, past trucks, platforms and crates, past a door that says “Rick Astley” and another that says “Lulu”, three red, white and blue superhero costumes hang on a rail. Part Captain America, part Evel Knieval, they’re the first of a bold flurry of outfits that the current triumvirate of Take That will sport when they take their greatest hits tour to their home town.

Next week Gary Barlow, Howard Donald and Mark Owen will begin eight nights at the O2 versus their five in Manchester, but it’s up here where they’re the real heroes. The venue has renamed itself the “Take That Arena” for the occasion, which takes their tally of shows there to a record-breaking 46. “When you come home it feels like the first night again,” says Donald, 50. “All the adrenaline’s going. I go a little bit weak at the knees, a bit emotional. It all comes out of you.”

It’s half a mile, 30 years and a world away from the club where manager Nigel Martin-Smith auditioned these three, plus breakdancer Jason Orange, a 16-year-old Robbie Williams and a sixth candidate who they claim they can’t remember, to form a British version of New Kids on the Block. Owen, now 47 and sporting long hair and a conman’s moustache, says he doesn’t recall what he thought of the others at the time, but remembers the manager taking them for sandwiches in the British Home Stores café afterwards.

Barlow, 48, trim, stubbly and bespectacled, confesses that he hadn’t heard of the American boy band when Martin-Smith showed him their videos, but understood the concept when he mentioned The Jackson 5. “I remember him saying, ‘It’s a five-piece group’ and me thinking, ‘I don’t want to be in a group,’” he says.

“He still says that!” jokes Owen.

“Well, he’s getting there, bit by bit,” says Donald. “There’s just three of us now.”

The band’s fluctuating numbers have been a large part of the story over the years. Williams walked out in 1995, turning his previously suppressed talent and ego into 18 Brit Awards and a spectacular solo career, and causing Take That to announce their split in 1996. A “Where are they now?”-style ITV documentary in 2005 found Owen walking his spaniel in the Lake District, Donald DJing, Orange aimless in Ibiza and Barlow rattling around an enormous Cheshire house built on past glories. The producers, cruelly, got them together for a catch-up and then told them Robbie wasn’t coming. But he said some warm things on video, the public realised how much they’d missed them and extraordinary success as a reunited quartet followed. The nine-times platinum comeback album Beautiful World, from 2006, became their biggest seller.

“We’d all kept in touch sort of, but not much. I remember being very wary of doing anything in public at that point,” says Barlow of the documentary. “But we felt quite good after that day, because Rob had said some really nice things about us. I remember us all feeling it was gonna be all right.”

Williams rejoined for one more album and tour as a five-piece, Progress, in 2010. Then Orange left in 2014, the same year that Barlow, Howard and Owen had been revealed to have invested millions in what was described by a judge as a tax avoidance scheme. The subject is off limits today. They have repaid the debt, and judging from the fan reception as they arrive on stage inside the mouth of a giant rotating Pac-Man sphere, all is forgiven.

Williams filmed a new video for the tour of him singing Everything Changes, one of numerous old songs that have been reworked and freshened up for this show and a new hits collection, Odyssey. Orange sent an email to say good luck on the day the tour began. “It came at the right time, when we were all backstage bricking it. The energy’s changed around it all now. It’s just open. Everyone communicates in a better way. I don’t know how it turned sour,” says Owen of the period in which they were all estranged. “I guess some relationships end up heading in a direction and it got worse.”

How close did they come to splitting a second time when Orange departed? “It was discussed,” says Owen.

“Close-ish, definitely,” says Barlow. “I just couldn’t see it as a three, and it didn’t help that we’d just been a five. We watched what the fanbase were feeling, and of course they don’t want you to go anywhere. But at some point the question had to come back to us. In the end we thought, why don’t we just get in the studio and let the music decide for us? Very early on, we found These Days. It sounded like a hit record straight away, so once that arrived, I think we were good.” The song, their first release as a trio, became their 12th number one in 2014.

So what’s the cut-off? Would it still be Take That if there were two of them? Donald simply laughs at the question. Barlow says: “I think this is it. This is the version where it stops.”

“Getting on stage is where it started to feel more natural again,” adds Owen. “In the beginning, you notice there’s this blank space. Touring is the best way to work through that. It feels right and looks right as what you are. But it takes time.”

In the current show, they look comfortable as a trio. Pulling wheelies on Harleys during new song Spin, they’re like good-looking versions of the old Top Gear team, with Barlow as Clarkson. The arena setting can’t match up to the grandiose spectacle of their Circus Tour of stadiums in 2009, which the four of us agree was our favourite, with its hot air balloon and marching robot elephant. But the scale of the endeavour is still remarkable: 14 dancing girls, jets of multi-coloured flames and more shifting platforms and ladders than a Nintendo game. When the Earth is projected onto the Pac-Man sphere during Giants, it looks pretty much life-size.

It’s an even-handed look back over just about three decades (it’s 30 years since they met, but the 30th anniversary of their first single will be in 2021) featuring 12 songs from the group’s first life and 13 from their second. This time, they’re proudest of something other than the stunts. “There is a point where we come on the stage and stand still and just play the songs, which for us is a great moment,” says Owen. “We’ve often said this line: ‘Regardless of whether you like the music, come and see Take That – it’s a good show.’ We have to stop saying that. It belittles us a bit. We don’t have to put ourselves down.”

Take That first released a greatest hits collection as they split in the Nineties. Does the new release signal, if not another break-up, at least a longer break? “It feels like it,” says Barlow.

“What would you like?” Owen asks me. “Do you think we should bugger off?” I think that, while endless bands have buried hatchets for lucrative backwards-looking nostalgia tours, a rare group that proves it’s possible to come back and be better than you were the first time should be encouraged to stick around for as long as possible.

“We’ve been on the run since 2005. It’s been relentless. And it is time,” says Barlow. “It is the end of chapter two and I think we’re all looking forward to a little break. I think it will inspire us to see what’s next.”

Whatever it is, this story is far from over. 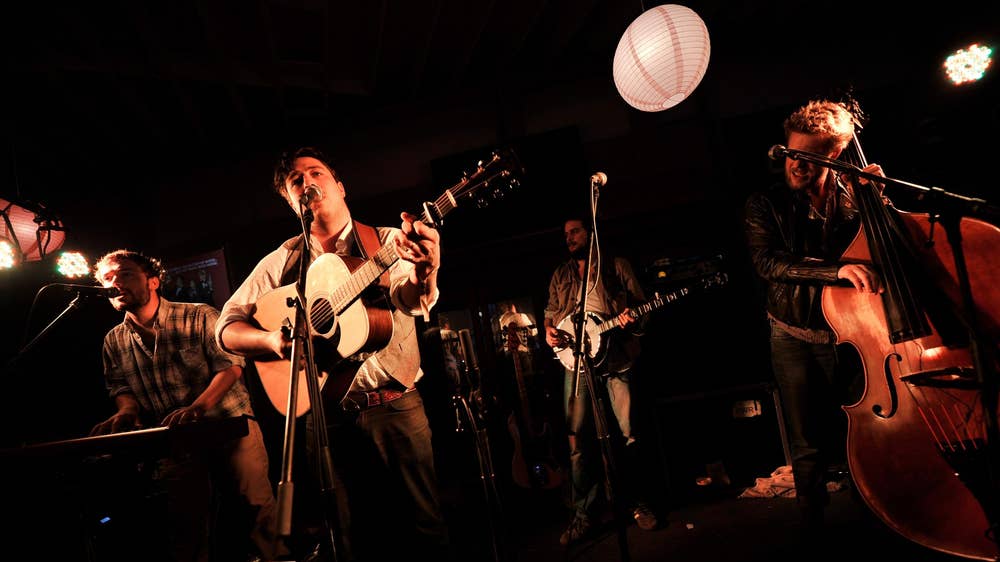