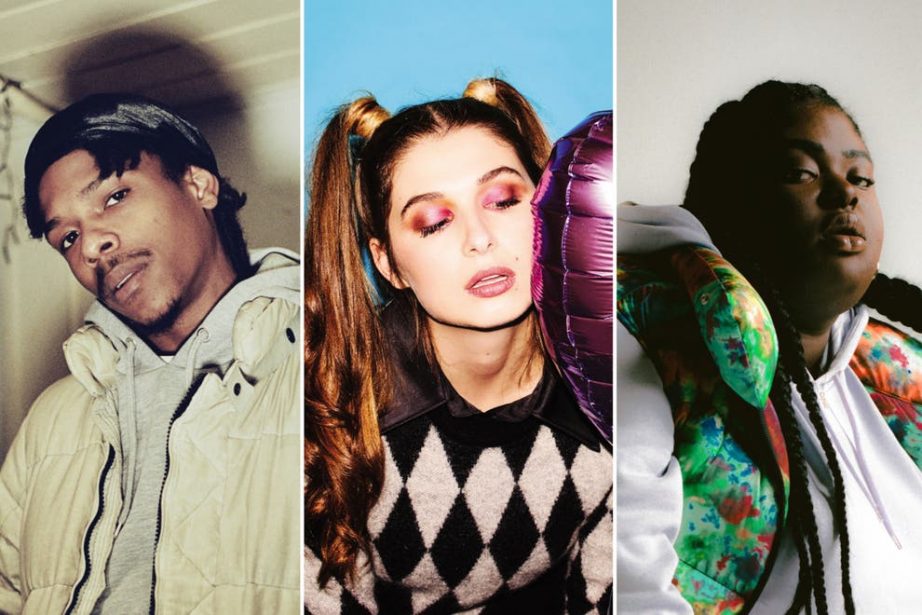 Given recent experience it seems pretty foolish to be attempting to predict the year ahead, but it’s tips season, which means a line of box-fresh musicians has already formed, eager for stardom in 2021. They’ll be jostling extra hard for attention given that many of last year’s predictions, most notably Brits Rising Star winner Celeste, have had their household name status delayed. But these newcomers are worthy of whatever attention they can muster, and hopefully one day soon – everything crossed – they can appear on a stage to prove it.

Bella Latham, the London-based South African who is Baby Queen, has been supporting Yungblud at his recent streamed gigs, and fills her songs with similar Millennial preoccupations about online identities and insecurities. Her recent EP, Medicine, is all about digital life, with songs including Internet Religion, Online Dating and Pretty Girl Lie. “Edit my legs til the doorway bends,” she sings – the strange poetry of Instagram fakery. The music is bubblegum pop with an alternative edge, highly hummable melodies and energetic electronics, with rumbling guitars darkening the corners.

Try: Want Me – racing power pop with a spoken verse and a giant whoosh of a chorus.

After the Brit and Mercury-winning success of Dave, it shouldn’t be too surprising to see a rapper sitting at a piano and spinning stories that are brutally honest. Berwyn Du Bois sings too, sounding blunt and emotional on songs which have detailed his personal struggles unflinchingly. Glory, his buzz-building early single, was a gripping listen, with references to sleeping in his car, trouble with immigration officials and a mother in jail. He performed it in the summer on a lockdown edition of Later… With Jools Holland, in a bleak room with a cheap plastic kettle and an empty mug tree for an audience. His future looks a lot brighter than that.

Like one of last year’s great hopes, Beabadoobee, Jess Smyth may not have realised how far she would get with a ridiculous stage name when she chose it. The alias Biig Piig came from a drunken misreading of a pizza menu, and is not at all evocative of the laid-back, sophisticated R&B pop that she sings in a breathy mix of English and Spanish. Born in Ireland, raised in Spain and ending up in London, her EPs so far have included an equally exotic mix of sounds. Don’t Turn Around is the current highlight, sliding along on a disco sample also used by Nineties R&B smoothie Montell Jordan.

Try: Feels Right – the latest single, which is quietly euphoric and another gem.

The Hackney rapper born Brenda Mensah is well on the way to achieving her goal of switching from someone who works in Harrods to someone who shops there. A former Christian Louboutin salesgirl, she has created a succession of eye-popping videos this year, performing upside down in a car mechanic’s workshop, writhing in a cage and in a range of ambitious living room performances. One person who noticed early on was hip hop icon Missy Elliott, who recognised a kindred spirit and agreed to appear on Runway’s recent single ATM.

Alabama’s Jane Chika Oranika should be used to appearing on lists proclaiming her greatness by now. In the summer she was one of two female rappers named in XXL magazine’s Freshman Class, an influential round-up of those set for big things in hip hop. Next month she’ll find out whether she’s won the Grammy award for Best New Artist, having been shortlisted alongside Doja Cat and Megan Thee Stallion for the trophy last won by Billie Eilish. Her honest, political style first earned viral fame when she made a freestyle criticising Kanye West in 2018. She’s gravitating more towards singing on her latest single, FWB, but whatever she does is worth hearing.

The bedroom pop genre doesn’t look on paper as if it should produce genuine stars, with meekness and lack of sonic polish its key components, but singer-songwriters such as Clairo and Dodie are now big attractions, and Norway’s Marie Ulven is set to follow when her debut album arrives next year. Her young fanbase has been streaming her songs in large numbers since 2018. Her debut single, I Wanna Be Your Girlfriend, has been played over 130 million times on Spotify. More recently she got louder on songs such as Bad Idea! and Rue.

With her outlandish headgear and face tattoos, Aria Wells sticks out easily in any group of new singers. That striking look has already earned her advertising work with Adidas. Her music is a hazier proposition, a relaxed mix of psychedelic soul and reggae that hovers in the room like a thick fug of smoke. She spent her teens in Hastings but is back in her London birthplace now, creating a sonic  melting pot that ranges from the hypnotic R&B of her latest single, Spells, to the political dub of Revolution.

Guitar bands are thin on the ground these days – it’s simply cheaper for record labels to work with solo artists – but this north London quintet are working hard to build a suitably big fanbase. They looked set for a big 2020, having already opened the main stage at Reading Festival in 2019 and toured supporting George Ezra. Another jaunt with the similar sounding Bombay Bicycle Club was a pandemic victim, but they went undaunted into what they claim was the first live tour of lockdown – playing in parks to widely spaced groups. They look and sound like they have the energy to achieve something good in 2021.

Try: Ticket to Ride – not the Beatles one, but a highly catchy blast of indie pop.

This year couldn’t have started better for Mikayla Simpson from Spanish Town in Jamaica. She won the Grammy Award for Best Reggae Album despite two pretty big obstacles: the fact that a woman had never won in the category before, and that her winning “album”, Rapture, was actually a five-track EP. Since then, like the rest of us, she’s been slowed down. One great summer single, inevitably called Lockdown, was followed by a collaboration with dancehall giant Buju Banton. If a debut album proper, and long rumoured work with Rihanna, materialises in 2021, it will really be her year.

Try: Toast – a thankful song that acknowledges her blessings over a vibrant electronic bassline.

The area in Toronto where Mustafa Ahmed grew up, one of six children of Sudanese immigrants, is called Regent Park. It doesn’t sound as pleasant as its London namesake. A member of his former rap group Halal Gang, Smoke Dawg, was shot dead in 2018. “Just stay inside tonight/You know what’s happening outside,” he sings on Air Forces, one of two solo songs released to date that showcase a sensitive acoustic soul sound. A former teenage poet and a practising Muslim, as a musician he’s moving in elevated circles, working with James Blake and earning co-writing credits on songs by Camila Cabello and The Weeknd. His first longer collection is due early next year.

Coventry rapper Pa Salieu’s music career could have been over before it really began when he was shot in the head in the autumn of 2019. He survived to appear on stage in Birmingham just three weeks later, and has gone about his work since with immense energy and passion. A 15-track mixtape titled Send Them to Coventry appeared in October, a collection of gritty afrobeats sounds that evoked his Gambian roots and rebranded his hometown as “COV – City of Violence”. It also marked him as the most distinctive new voice in UK rap.

Try: Betty – a glowering mix of afrobeats and dancehall with an unforgettable chorus.

Arkansas singer Abbey Smith, whose stage name is her first name backwards, is another one who ought to have broken through to massive solo success already. She was teed up perfectly in 2019, with guest appearances on Ed Sheeran’s No.6 Collaborations Project, Stormzy’s Heavy is the Head and Mark Ronson’s Late Night Feelings album, on which she sang three songs in her huge, acrobatic voice. A solo album seemed close to a release but has been tucked away again, and she put out just one low-key single, Distance, in 2020. Even so, she’s a superstar waiting to happen.