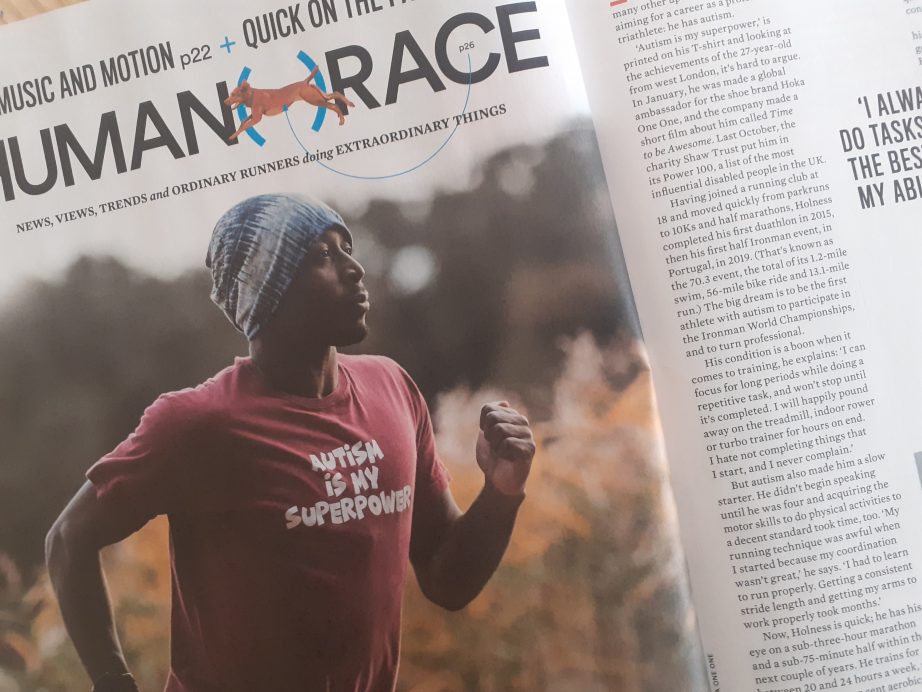 Sam Holness has a significant advantage over many other upcoming sportspeople gunning for a career as a professional triathlete: he has autism.

“Autism is my superpower,” it says on his T-shirt, and looking at the achievements of the 27-year-old from west London, it’s hard to argue. In January he was made a global ambassador for the shoe brand HOKA ONE ONE, who made a short film about him titled “Time to be Awesome”. Last October the charity Shaw Trust put him in their Power 100, a list of the most influential disabled people in the UK.

Having joined a running club at 18 and moved quickly from Parkruns to 10k and half marathons, he completed his first duathlon in 2015, then his first Half Ironman in Portugal in 2019. (That’s known as the 70.3 event, the sum total of its 1.2 mile swim, 56 mile bike ride and 13.1 mile run.) The big dream is to be the first athlete with autism to participate in the Kona 140.6 Triathlon World Championships, and to go pro.

His condition is a boon when it comes to training, he explains: “I can focus for long periods while doing a repetitive task, and won’t stop until it’s completed. I will happily pound away on the treadmill, indoor rower or turbo trainer for hours on end. I hate not completing things that I start, and I never complain.”

However, it also made him a slow starter. On the communication front, he didn’t begin speaking until he was four. Acquiring the motor skills to do physical activities to a decent standard took extra time too. “My running technique was awful when I started because my coordination wasn’t great,” he says. “I had to learn to run properly. Just getting a consistent stride length and getting my arms to work properly took months.”

Now, he’s quick, with an eye on a sub-3 marathon and a sub-75-minute half within the next couple of years. He trains for between 20 and 24 hours a week across six days, 80 per cent aerobic, 20 per cent HIIT, with a bit of yoga in the evenings for strength, conditioning and to help with sleep, which can be a particular issue for people with autism. His dad, Anthony, left his job in IT sales to coach and manage him, and is now a certified Ironman coach who’s also pursuing British Triathlon Coaching qualifications. He’s the best man for the job, says Sam.

“My dad knows how to communicate with me. I learn visibly and require my coach to speak slowly and not ask too many questions at once, because it can get confusing. We make a great team.” Meanwhile his mum looks after his nutrition and wellbeing. He also gets lessons and advice from Level 3 British Triathlon coach Matthew Tithecott, ultrarunner Andy Wren, and Mick Woods, a Performance Coach at St Mary’s University.

Sam also attended the Twickenham university (as did Sir Mo Farah) completing a BSc in Sports Science, for which he wrote a dissertation on coaches who work with neurodiverse athletes. “I found a need for coaches to communicate more effectively and use more visual tools, as well as having greater expectations,” he explains. “Athletes with autism are ideal candidates for endurance sports, as it requires focus and long efforts of aerobic training. I always do tasks to the best of my ability. I like doing something until I perfect it.”

He has high hopes of changing his sport for the better in other ways, too. He’s involved in an attempt to broaden triathlon inclusion for people with intellectual disabilities. Currently he falls between two stools, unable to go to the Special Olympics because his IQ is greater than 75, and prevented from participating in the Paralympics because he doesn’t have a physical disability.

Of course the main thing keeping him out of competitions lately has been the pandemic. “I know that my dad is pleased with how I have coped, because I can get anxious when my routine changes too much,” he says. Even so, the cancellation of every race he entered in 2020, and the ongoing impact on his swimming training in particular, has been hugely frustrating. “I am fed up with Covid. I just want things to go back to normal so that I can race.”

At least his swelling public profile can go on doing good work. Three thousand Instagram followers are keeping an eye on his training. If he can end up becoming the first pro triathlete with autism, he surely won’t be the last. “Being an athlete has changed my life by improving my confidence and self-esteem. It’s given me purpose, goals and an opportunity to be the best I can,” he says. “I have chosen to be an athlete so that I can motivate other people like me to take up sport and so that I can win medals. Don’t let your disability be a reason for not doing sport.”

The New York track athlete, who was diagnosed with autism at age two, has cracked the four-minute mile and won gold in the 1500m in the T20 category at the 2016 Paralympics in Rio.

The three-time Ironman 70.3 champion from Vancouver is the only openly gender non-binary professional triathlete and is also neurodiverse, having been diagnosed with ADD (Attention Defecit Disorder).

South Londoner Arday has autism, didn’t learn to read and write until he was 18 and is now a Sociology professor at Durham University. He also ran 30 marathons in 35 days in 2010. 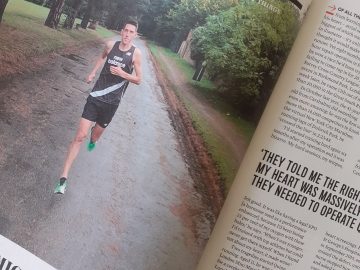