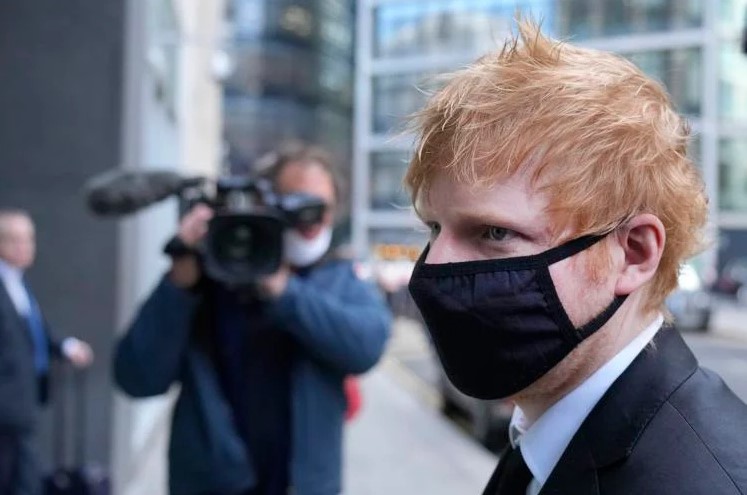 The big guy beat the little guy in the copyright battle around Ed Sheeran’s Shape of You, but this is an occasion when it would be unwise to root for the underdog.

Mr Justice Zacaroli’s verdict on whether Sheeran and his co-writers, Steve McCutcheon and Johnny McDaid, had copied the “Oh I oh I oh I” segment of the hit song from Sami Chokri and Ross O’Donoghue’s lesser known 2015 single Oh Why, noted that there are “similarities between the one-bar phrase” of the two songs but that Sheeran had “neither deliberately nor subconsciously copied” Oh Why.

Sheeran released a written and video statement about the case, pointing out the cost on his and his co-writers’ mental health (“We are not corporations. We are not entities. We are human beings. We are songwriters.”) but also the “cost on creativity”. Writing pop music is not something that can be done in fear, with half an eye on every other composition in history that might have used a similar chord progression. A litigious culture around a creative industry can only harm the music, for which we can partly blame a similar case in the US in 2015.

In hindsight, the song Blurred Lines was aptly named. The verdict in the copyright trial against that song’s composers, Pharrell Williams and Robin Thicke, saw an eight-member Los Angeles jury awarding Marvin Gaye’s family amost $7.4 million after concluding that the pair had copied Gaye’s 1977 hit Got To Give It Up. What they heard wasn’t the exact same notes or scales but a generally similar groove, what Williams called “channeling that feeling, that late-’70s feeling.” As Williams’s spokeswoman put it, the decision “sets a horrible precedent for music and creativity going forward.”

It certainly put many of pop’s biggest stars on the back foot. If Blurred Lines, the biggest selling single of 2013, could be ruled unoriginal, how many other hits are vulnerable? Sheeran’s battle with Chokri actually began with the star approaching the High Court in 2018, seeking a declaration that Shape of You’s writers had not infringed Chokri and his co-writer Ross O’Donoghue. Already aware of potential similarities between Spotify’s most streamed song of all time and other material, Sheeran had belatedly given co-writing credits to the composers of TLC’s 1999 hit No Scrubs seven weeks after it first hit number one worldwide. He also said in court that he altered the original version of the song because he felt it sounded too close to No Diggity by Blackstreet.

Perhaps Sheeran, so big that he’s playing five solo shows at Wembley Stadium this summer, was considered an easy target, having already settled a case with X Factor winner Matt Cardle over the song Photograph. It’s easier, and usually cheaper, to stay away from the courts – hence the judge calling the Shape of You claim “speculative”.

The problem is that as long as a musician can be proved to have heard another song, they could be ruled to have copied it, even if it was unconscious. In 1976, Judge Richard Owen of the United States District Court in Manhattan ruled that George Harrison had plagiarised The Chiffons’ 1962 hit He’s So Fine when he wrote My Sweet Lord, even though he concluded: “I do not believe he did so deliberately.”

Sheeran’s defence hinged on proving that he had never heard Chokri’s far more obscure recording, but other stars couldn’t take that risk. Surely no one thinks that Taylor Swift and her co-writer Jack Antonoff were rocking out in the studio to Right Said Fred’s I’m Too Sexy when they wrote her 2017 hit, Look What You Made Me Do, yet the negligible melody of the chorus can be considered an “interpolation”, so there they are in the credits.

Swift has been on all sides of this issue lately, which seems inevitable for one of the world’s most successful songwriters. Olivia Rodrigo recently gave Swift a co-writer credit for a minor similarity between two songs, while Swift is still being sued over who invented the phrase “Players gonna play, haters gonna hate”.

Of course the stars don’t want to look like bullies. Dua Lipa too is currently the subject of two copyright claims from unknown American acts over her hit Levitating. But Sheeran, a man who has given life changing support to a multitude of lesser known musicians throughout his career, was right to fight this one and defend the creative process. As Elvis Costello said when it was pointed out that another Olivia Rodrigo song sounded like one of his: “This is fine by me. It’s how rock and roll works. You take the broken pieces of another thrill and make a brand new toy. That’s what I did.”